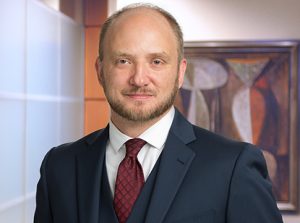 In his legal work at Maslon LLP, Evan Nelson focuses on property rights cases, from homeowners seeking just compensation for the value of their land in eminent domain disputes to fights over family trusts.Nelson expands his expertise into many high-profile pro bono cases, including the struggle over a sulfide mine in the Boundary Waters. A team of Maslon attorneys he led thwarted progress on the proposed Polymet copper-sulfide mine in Ely by winning cases brought to the Minnesota Court of Appeals and the Minnesota Supreme Court.

“Working with environmental groups and the Fond du Lac Band of Lake Superior Chippewa has been fantastic,” Nelson said. “The attorneys on the other side have been remarkable as well. It’s been a privilege to be on that case.”

In another pro bono case currently on appeal, Nelson and Maslon attorneys saw Texas inmate Douglas Tyrone Armstrong removed from death row in 2017 after they successfully argued he had not received adequate representation during his sentencing hearings.

Now they have a motion challenging his conviction by arguing that his lawyers did an equally ineffective job defending him. Nelson has also stayed active as a leader in the Minnesota Eminent Domain Institute, an organization that studies how to protect the interests of property owners.

While working as a graduate admissions director at the University of North Dakota earlier in his career, Nelson discovered he enjoyed policies and procedures. A faculty member suggested the law and he took the advice and found a rewarding career.

“Very few clients want to be in litigation, but they need to have some sort of a good result or something positive to come out of it,” he said. “To be able to help them get there is very rewarding.”