Stenehjem’s office said in a statement Friday night that the longtime attorney general died after his admission to the hospital that morning. 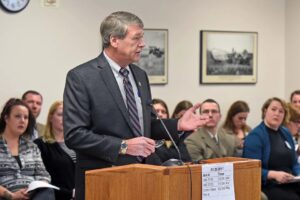 A spokeswoman for his office, Liz Brocker, confirmed his death in a statement Friday evening.

“It is with the utmost sadness that the Office of Attorney General announces that Attorney General Wayne Stenehjem passed away unexpectedly,” Brocker said. “We know Wayne was a widely respected and well-known public figure, but we ask that his family be allowed time to grieve in private.”

The cause of death was not immediately provided Friday evening. Earlier in the day Steve Stenehjem, a cousin of the attorney general, said he’d been told that Wayne Stenehjem was found unconscious Friday morning at his home in Bismarck when a contractor arrived to do some work.

Last month Stenehjem announced his plans to retire at the end of this year following the longest Attorney General tenure in North Dakota history.

Statements and social media testimonials poured in from all corners of North Dakota leadership on Friday evening, with Congressional members, colleagues in state government and politicians from across the aisle expressing shock and sadness at Stenehjem’s death.

In a statement, Gov. Doug Burgum praised Stenehjem’s years of service in state government and spoke warmly of their time working alongside one another. The two men ran against each other for the governor’s office in 2016 and had since worked closely at the top of North Dakota government.

“Wayne embodied public service,” said Burgum, praising Stenehjem’s commitments to public safety and the North Dakota citizens in two decades at the state’s top cop. “North Dakota is a safer place because of his unwavering commitment to law and order, his loyalty to his team members and his utmost respect for our men and women in uniform.”

The second-term Republican governor also highlighted Stenehjem’s pride in his small town roots, his time practicing law in Grand Forks and his affinity for his Scandinavian heritage.

“His dry Norwegian humor was at its sidesplitting best at Norsk Høsfest in Minot during the induction ceremonies for the Scandinavian-American Hall of Fame – an honor he himself received in 2007,” Burgum said. “Most of all, he was a loving husband and father, often sharing photos of his travels with Beth and beaming with pride as he would carry a plate of her Scotcheroos into a meeting or talk about son Andrew’s military service and latest adventures.”

The governor directed all flags at state governments to fly at half-mast until further notice.

Stenehjem’s wife Beth recently retired. The attorney general said when he announced his plans to step down in December that he was looking forward to spending more time around Bismarck and traveling with her in their retirement.

Stenehjem spent nearly all of his adult life in North Dakota government, totaling more than 40 years between the Legislature and as North Dakota’s top cop.

“I ran for public office because of my love for North Dakota, and my love for our state has only grown during that time,” he told reporters at his retirement announcement.

First elected to the House of Representatives in 1976, Stenehjem served four years in the lower chamber before running for a seat in the state Senate, where he spent two decades. His tenure in the Senate included seven years alongside his brother Bob, who later became majority leader.

After a successful run for attorney general in 2000, Stenehjem went on to win each of his subsequent elections to that office by wide margins.

He also mounted a campaign for governor in 2016, earning the GOP endorsement, but came up short in a primary race against Burgum, then a Fargo entrepreneur.

During his retirement announcement, Stenehjem reflected on accomplishments busting locally operated meth labs, curbing human tracking and helping to reduce drunk driving. He also said he was proud of his record standing up for the state’s transparency laws and lobbying for the creation of the state crime lab.

Stenehjem noted that he helped set regulations on the flaring of natural gas in the state’s oil fields as one of three members on the state’s powerful Industrial Commission. He also pointed to other environmental achievements from his career, including a victory in a 2004 case that earned $30 million for the city of Mandan after a massive underground diesel spill at a BNSF rail yard.

In 2020, Stenehjem joined an unsuccessful Texas lawsuit disputing then-President-elect Joe Biden’s victory in a handful of battleground states. Last year, the attorney general joined several lawsuits against the Biden administration over COVID-19 vaccine mandates, and pursued a solo challenge against the Democratic administration for its restrictions to oil leasing on federal lands.

Following Stenehjem’s unsuccessful 2016 bid for governor, he reflected on his time at the top of North Dakota law enforcement for an interview with the Grand Forks Herald , describing his thoughts walking past portraits of attorneys general past each time he came into the office.

“I always remember there’s someone coming after me,” he said. “I’m only here for this temporary time, however long it may be.”

Friends and colleagues recounted memories from their own experiences with the staple of the North Dakota capitol on Friday.

“I’ve encountered a lot of politicians who loved North Dakota, but nobody loved the people who lived here the way he did,” said Bismarck Republican Sen. Nicole Poolman, Stenehjem’s running mate in the 2016 governor’s race. “His passing is a tremendous loss to our state. Truly the end of an era.”

In one memory from the campaign trail, Poolman said that a young man approached Stenehjem, hugged him and expressed through tears what a difference the attorney general had made in his life.

“It was something that I could tell that Wayne just saw all the time,” Poolman said. “People coming up to him all the time telling him what a tremendous difference he had made to them.”

His longtime associate and fellow state office holder Secretary of State Jaeger described his “special friend” as intelligent and funny.

The two men often worked together on election issues over long, parallel careers in state government, and Jaeger expressed an unwavering confidence in Stenehjem’s decision-making.

He added that Stenhjem would often call him his “best client.”

The secretary of state echoed the words of many Friday evening in calling Stenehjem’s death “so unexpected.” It will be challenging time for the Stenhjem family, Jaeger said, adding that the extended Stenehjem family includes the many people he had relationships with across the state.

“We’ve lost a great public servant who has been serving the state since he graduated from law school,” said Wardner, a 30 year veteran of the Legislature who briefly overlapped with Stenehjem in the Senate.

With all of the federal executive orders of the last few years, Wardner said he would go into Stenehjem’s office often seeking direction. “(He) always gave us sound counsel and I was satisfied when I left his office,” Wardner said.

Moreover, he said Stenehjem “always ahead of everyone on what the next move should be” and said North Dakota would miss his thoughtfulness and strategic planning.

“He knew the right time to get in the game and was calm under pressure,” Wardner said.

Members of North Dakota’s Congressional delegation were among the cascade of political leaders who expressed their sadness at the longtime attorney general’s death Friday night. Sen. Kevin Cramer called him “a true patriot” and said “he always fought for what was right.” Sen. John Hoeven said he was a fierce advocate for the rule of law and the rights of our state’s residents.”

Rep. Kelly Armstrong echoed others’ words about Stenehjem’s commitments to North Dakota and expressed his own appreciation for the mark the attorney general left on his life.

“He was smart, compassionate, and had the most down-to-earth approach to public service,” Armstrong said. “He taught me how to turn legal knowledge into smart policy. I would not be where I am today without Wayne’s friendship.”

The previous occupant of Stenehjem’s office, the former Democratic Sen. Heidi Heitkamp, also recalled her time spent with the man who succeeded her as attorney general.

“I can only imagine how tragic this is for Beth and Andrew, his amazing extended close family, and the staff at the Office of Attorney General,” Heitkamp said in a tweet. “The people of North Dakota mourn the loss of this funny, smart and committed public servant.”

Read the original story by The Grand Forks Herald