Hoffmann, an internationally known chemist, has served in multiple leadership roles at UND and in his field 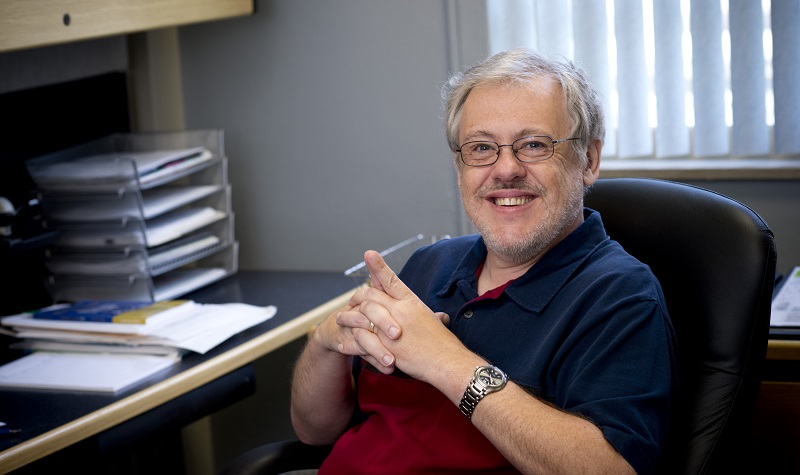 Mark Hoffmann, associate dean for research at UND’s College of Arts & Sciences and Chester Fritz Distinguished Professor of Chemistry, has been named a Fellow of the American Association for the Advancement of Science (AAAS) for distinguished contributions to chemistry.

Hoffmann is an internationally recognized expert in quantum chemistry, a powerful tool that’s used to study the properties of molecules and their reactions. In a 2012 article in the journal Science, for example, Hoffmann and his co-authors discovered a molecular-level interaction that scientists had puzzled over for decades but had been unable to explain. In the article, Hoffman and his colleagues identified the interaction as an entirely new – and previously unknown to science – type of chemical bonding.

Hoffmann has taught at UND since 1988 and chaired the Chemistry Department from 2003 to 2010. He was named a Chester Fritz Distinguished Professor, UND’s highest academic honor, in 2006.

In 2016, Hoffmann chaired the Triennial Congress of the International Society for Theoretical Chemical Physics, which was held under his leadership in Grand Forks. The conference attracted 300 scientists from around the world.

“I’m grateful and humbled to be receiving this recognition as a Fellow of AAAS,” Hoffmann said.

“UND has given me the opportunity to pursue my dreams of understanding better the unobservable details of molecules using high performance computers, and then to share this passion with students of all ages in both research an in courses. Our work on the perhaps esoteric sounding area of ‘multireference perturbation theory for electronic structure’ has allowed us to contribute to the understanding of problems in areas as disparate as catalysis in metals and rare earth elements, in astrochemistry, and in proton transfer in molecules of biological importance.”

Hoffmann will be one of 564 AAAS Fellows who’ll be announced in the January 2022 issue of Science. The 2021 class of AAAS Fellows includes scientists, engineers and innovators from around the world, spanning scientific disciplines.

Being named as a Fellow by AAAS is one of the scientific community’s most distinct honors, and is a tradition that dates back to 1874. “AAAS is proud to honor these individuals who represent the kind of forward thinking the scientific enterprise needs, while also inspiring hope for what can be achieved in the future,” said Dr. Sudip S. Parikh, AAAS chief executive officer and executive publisher of the Science family of journals.

The new Fellows will receive an official certificate and a gold-and-blue pin (representing science and engineering, respectively) to commemorate their election to this lifetime honor. They’ll be celebrated later this year during an in-person gathering when it is feasible from a public health and safety perspective, the association reports.