Aerospace Community Day is back on Saturday, April 2 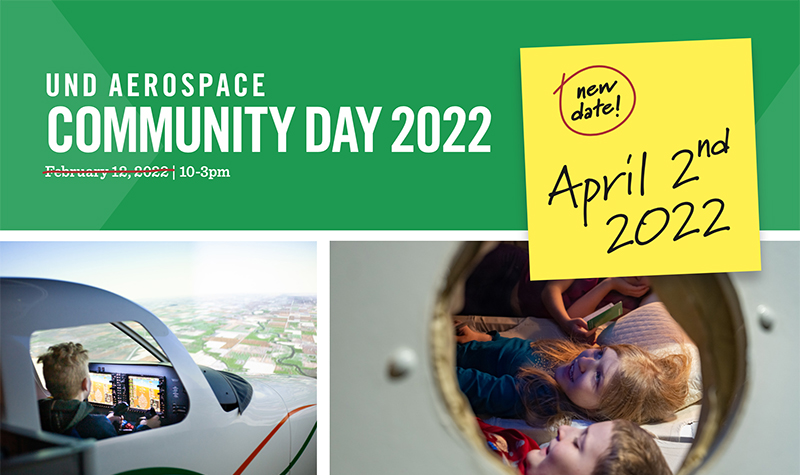 The event – free for all ages – is open to the public and spans the entirety of the John D. Odegard School of Aerospace Sciences, from the west side of campus to Grand Forks International Airport.

This year marks a long-awaited return for Aerospace Community Day, which last occurred in 2020. Since it began in 2018, the event has drawn thousands of people to tour and experience all things UND Aerospace.

For example, visitors will be able to take a flight in an aircraft simulator, or sit inside a real aircraft; predict the weather with the UND Weather Update Team, or watch a weather balloon launch outside Clifford Hall; explore space in virtual reality, or see real spacesuits at the Human Spaceflight Laboratory. In other words, there will be plenty to explore throughout the day between air, space and Earth sciences.

Visitors are encouraged to grab an Aerospace Passport when they check in at any of the entrances marked by green and black flags at Odegard, Clifford, Ryan and Robin Halls, as well as at UND Flight Operations at the Grand Forks airport. Prizes can be earned by filling out the passport at various hands-on stations and activities.

UND will not be ticketing parking on the day of the event for those parked in UND Aerospace parking lots. A bus stop at Clifford Hall, on University Avenue, will be available throughout the event to transport visitors to and from UND Flight Operations at Grand Forks International Airport.

Due to TSA guidelines, all guests visiting the UND Flight Operations facility at the airport must wear a mask.

Highlights this year include a themed LEGO display crafted by GFKlug, which will be available for viewing at UND Flight Operations. Also, a full schedule of space-themed videos and documentaries will be played at the Odegard Hall Atmospherium, starting at 10:15 a.m. – starting with a double feature of “Touching the Sun” and “Earth’s Hidden Water.”

Other atmospherium theater showings include “Apollo’s Legacy,” “Exoplanets: Discovering New Worlds,” and kid-friendly features such as “Larry Cat in Space” and “One World, One Sky: Big Bird’s Adventure.”

At 1 p.m., on Aerospace Community Day, a team of atmospheric scientists will be launching a weather balloon outside of Clifford Hall. Most other activities will be available throughout the day, from 10 a.m. to 3 p.m.

In announcing the event’s return earlier this year, Elizabeth Bjerke, associate dean of UND Aerospace, said she’s looking forward to once again having the entire School on display.

“This year, we’re adding some new features and new exhibits from many of our industry partners,” she said. “I love to think of this day as a pop-up science museum that we are able to bring to the community, hopefully to the excitement of people of all ages!”

More details for Aerospace Community Day activities can be found on the event’s Facebook page, as well as on the UND Aerospace website.