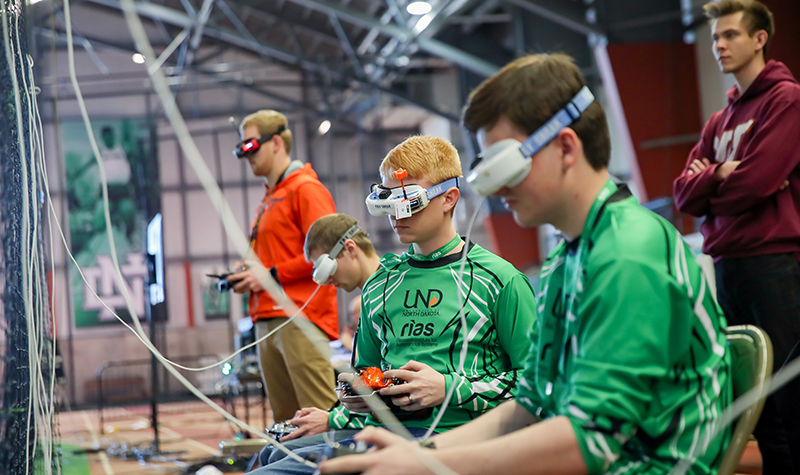 The University of North Dakota is once again playing host to the country’s best and fastest drone pilots during the Collegiate Drone Racing Championship, Saturday and Sunday, April 9 and 10.

Nearly 60 students, representing as many as 20 colleges and universities across the country, will descend on the Fritz Pollard Jr. Athletic Center to compete for fastest individual and fastest team, as well as national bragging rights.

This year marks the second time UND is hosting the intercollegiate competition, which is administered by the Collegiate Drone Racing Association.

Race pilots use small quadcopter drones capable of pulling 25 G’s and reaching speeds of more than 100 miles per hour on a track filled with tight loops and hairpin turns. To fly with precision, pilots use first-person-view goggles to see the course through the eye of their drone’s camera, a method commonly called “FPV racing.”

At the Fritz Pollard Jr. Athletic Center, the Fighting Hawks’ indoor training facility will transform into a championship-caliber course. The 200,000-square-foot, climate-controlled facility features bleacher seating for spectators and space for pilots.

The weekend event is free and open to spectators of all ages. Concessions will be available, and a “Kid Zone” featuring inflatable games will ensure fun for the whole family. Other spectating experiences, such as viewing races through the pilots’ perspective, or standing under the fastest part of the track in a secure “Danger Zone Drone Cage,” will be available throughout the weekend.

On Saturday, doors open for spectators at 9:30 a.m. for the qualifying rounds of competition, which will run until 5:30 p.m.

On Sunday, the venue will open at 7:30 a.m. in advance of an 8 a.m. opening ceremony. The championship bracket of competition will take place approximately between 1 and 6:30 p.m., with an awards ceremony to follow.

Since UND first hosted the national championship in 2019, the competition moved to a virtual format for the following two years. In 2020, the virtual event made it to regional television, on the Midco Sports Network.

Jordan Krueger, research manager for UND’s Research Institute for Autonomous Systems and a founder of UND’s drone racing team, said he likely speaks for most when he says he’s happy to finally race in-person.

“You can’t make the same connections and network virtually like you can at a live championship, at the CDRC,” Krueger said. “UND is an aviation and UAS pioneer, and the backing for this event has been phenomenal. I couldn’t think of a better place to host the return of this competition.”

Spectators who can’t attend in person can watch the event via livestreaming, on the MultiGP YouTube channel. This year’s event will also make it back to Midco Sports Network for rebroadcasting in the coming months.

UND’s own racing team is made up of nine pilots, plus two more when counting “alumni racers” in Krueger and Scott “Keaner” Keane. Pilots in FPV racing typically go by their call signs during competition.

“We’re pumped for the CDRC to be back in-person at UND this year,” said Gruber on behalf of his team. “Most of our current pilots weren’t around to see the last time we hosted in 2019, which I believe has added to the excitement that we’re all feeling.

“The work that UND and RIAS has done for the event has made it memorable for pilots across the country, including covering some costs that pilots would typically pay out-of-pocket. And I expect that to only grow in the years to come.”

Talent showcase for UND and beyond

Paul Snyder, director of UND’s UAS program, agreed. “The Collegiate Drone Racing Championship at UND is an incredible event to inspire future aviators, as well as give the community an opportunity to see the excellence of our current students,” Snyder said.

The sporting and spectator side of drones creates immediate connections between the community and work that UND is doing with UAS operations and research, he added. Competing at a high level takes immense skill, as well as technical know-how in maintaining the machines that make it all possible.

“This is a fantastic opportunity for UND to showcase our extremely talented students to local employers as well as to the overall community,” he said. “These students are the problem-solvers of the future, the best and brightest.”

In the weeks leading up to the championship, Krueger and fellow UND pilots have gone to a number of K-12 schools in the area to show students what drones are all about – including racing, as well as possible careers in the UAS industry. They’ve been able to reach well over 500 students in promoting the CDRC.

“The community, and the entire region, get to see one of the many great things that we get to do at UND,” said Mark Askelson, executive director for RIAS. “That’s a win-win.”