Space Ag Conference will explore how technology can solve food problems, from the Earth to Mars and beyond 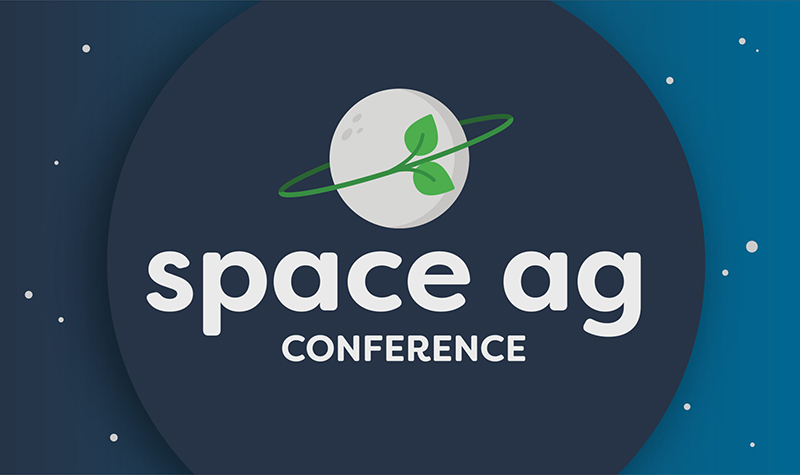 The University of North Dakota, in conjunction with Grand Farm, will be hosting the 2022 Space Ag Conference on Thursday, April 14, from 12 to 5 p.m. at UND’s Memorial Union.

Speakers will include U.S. Sen. Kevin Cramer and UND President Andy Armacost, as well as representatives from NASA, members of UND’s Space Studies faculty and organizations and researchers from around the world, who’ll be attending both virtually and in-person.

Registration for the event is available on the Grand Farm website, and free for all students, faculty and staff.

Billed as a half-day conference exploring advanced agriculture technologies, Space Ag will explore not only how we’ll be growing food in space, but also how space-based technologies such as satellites can improve food production on Earth.

Speeches and discussions will focus on what it takes to accelerate innovation, create sustainable food practices and increase food security.

Goals for the conference – now in its second year – include exploring how space research impacts today’s agricultural industry, as well as how the industry can work with NASA as experiments with “space agriculture” – how to grow food on spacecraft, asteroids or Mars – advance.

Farmers already are keenly interested in topics such as how to grow food indoors and use satellite imagery for precision agriculture, said Andrew Jason, ecosystems director for Grand Farm.

“Whether it’s the obvious solutions of satellites’ impact on agriculture or far-flung ideas of how developing seeds to grow in zero gravity – and with limited water, oxygen and inputs – will affect producing food on Earth – this conference is about looking up to the sky, feeling limitless and dreaming about these ideas together.”

The Grand Farm Education and Research Initiative, part of Emerging Prairie’s family of organizations promoting the growth of North Dakota’s entrepreneurial ecosystem, is designed to inspire collaboration among businesses, organizations and researchers to develop the farm of the future.

“The Space Ag Conference is a great connection to UND’s recent research initiatives in space, which have been backed by NASA, the U.S. Space Force, the North Dakota Space Consortium, EPSCoR, and the North Dakota Legislature,” said UND President Andy Armacost. “Feeding a growing world population is a monumental task, and as recent events have shown, even small disruptions in the food supply and energy sources can have an enormous impact globally.”

“Through its Department of Space Studies and research projects in the NASA-supported Inflatable Mars/Lunar Habitat, UND and its collaborators have years of experience in pioneering new concepts for food production, both for deep-space exploration and in preparation for living on the moon and Mars,” Armacost added. “This conference represents a wonderful opportunity to apply what we’ve learned while exploring new possibilities.”

A full schedule of events for the April 14 Space Ag Conference can be found on the Grand Farm website. The first workshop, “How North Dakota Small Businesses can work with NASA” at 9:30 a.m., led by Sen. Kevin Cramer, requires a separate registration.

Cramer will also be delivering one of the conference’s keynote speeches at 12:30 p.m., which follows a meet-and-greet with UND students at 11 a.m. and a complimentary lunch at noon.

Speakers and panelists will take the stage at the Memorial Union throughout the afternoon. Multiple NASA divisions and a variety of space exploration companies will be making presentations. Then at 2:30 p.m., UND Space Studies faculty, including Associate Professor Michael Dodge, Assistant Professor Sherry Fieber-Beyer and Pablo de León, professor and department chair, are scheduled to speak. Joe Vacek, associate professor of aviation, and Shawn Riley, chief information officer for the State of North Dakota, will also take part.

Space Ag in action at UND

At UND, faculty and student researchers have been exploring space as the “farm of the future” for a number of years.

In particular, the Inflatable Mars/Lunar Habitat located just west of campus has been a testbed for growing edible plants and produce in constrained, space-like conditions, according to de León.

The one-of-a-kind conditions of the Habitat have drawn students from around the world to run experiments tied to space agriculture. And in Space Studies, faculty and students are on the forefront of testing plant yields grown in simulated asteroid dust.

“What we’re looking at through this conference are the connections between space and Earth farming, and both disciplines can learn from each other,” de León said. “It sounds weird at first, the idea of farming in space. But NASA and commercial space companies are thinking about extending human presence beyond lower orbit.

“The logistics chain of dependence from Earth starts to get complicated the further you move away, so you need to produce food where you are.”

With the Space Studies department’s interdisciplinary focus, de Leon hopes his faculty can also contribute to discussions beyond tech, such as concerns of legality and international treaties in expanding resource production beyond our planet.

“North Dakota was a frontier state,” de León said. “The people, and the work they do here, are used to an extreme environment. Space is the ultimate hostile environment, so I think there are a lot of lessons to be learned when it comes to applying techniques to space production.”