A buzz of excitement filled one of the University of North Dakota’s newest buildings on Tuesday, July 26, as University officials, dignitaries and members of the public gathered to cut the ribbon on Robin Hall on the far west side of campus.

Several distinguished speakers took the podium one after another, including Sen. John Hoeven, R-N.D., Rep. Kevin Cramer, R-N.D., UND President Mark Kennedy among many others, to recognize the people who made the new building – primarily, UND’s new home for Unmanned Aircraft Systems education and research — possible.

Robin Hall also will be home to the Northern Plains Unmanned Aircraft Systems Test Site, one of only six test sites for UAS development in the country.

Speaking to Si and Betty Robin, lead benefactors for whom the building is named, Hoeven said, “visionary things don’t happen without visionaries,” to which the crowd generously applauded.

The Robins are behind the success of  Sensor Systems, a California-based manufacturer of aerospace antenna.

The 66,000-square-foot Robin Hall is being funded largely by private donations and $1.5 million in matches from the North Dakota State Board of Higher Education Challenge Fund. The state authorized UND to spend up to $25 million on the project. It’s being built and managed by the Aerospace Foundation, the private-sector support arm of UND Aerospace.

Self-guided tours
As the ribbon was cut, the words “we’re officially open for business” resonated throughout the crowd as the attendees began their self-guided tours of Robin Hall.

Entering Robin Hall through the automatic doors on the north side, a grand auditorium is set just to the left. Fashioned with student study areas, Robin Hall has a huge projection screen and nine thin, rectangular televisions lining above and below a staircase leading to an open balcony overlooking it.

Down the hallway, just through the northern entrance, an “Aerostop” store is located with large panels of glass lining the front, providing a view of all the UND Aerospace and Unmanned Aircraft Systems (UAS) items and memorabilia available for purchase. Just across the Aerostop is a massive “UND Aerospace Legacy Wall,” which pays tribute to donors and contributors to the new building: James C. Ray, Clay Lacy, Joe Clark and the Robins. Si and Betty Robin stand next to their portrait and biography on the large “Legacy Wall.” Photo by Jackie Lorentz.

Beyond the auditorium are classrooms and a small “hangar,” designated as a flight-test lab, where UAS students can practice maneuvers with one of the several unmanned systems available to them.

The upper levels of the building are filled with  classrooms, student study rooms, common areas, boardrooms and administrative offices. The entire building is in the form of a picturesque pillar covered with glass windows and reaching high above every structure around it, signifying the “sky is the limit” for aviation at UND. 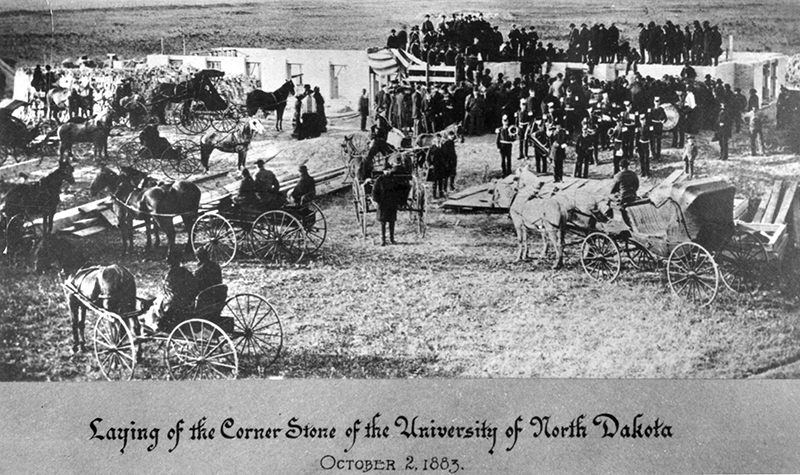