President Kennedy believes that state investments in UND initiatives tied to the One UND Strategic Plan will spark growth and benefit North Dakotans.

“The Strategic Plan is more than just a guiding document,” Kennedy said. “It’s a pathway to UND achieving its mission to serve as the chief opportunity engine for North Dakota and our students.”

Success stories abound at UND. From developing the first unmanned aircraft systems programs in the world to technology that helped enable oil drilling in the Bakken, UND has a demonstrated record of success when it comes to turning research into revenue.

And the Grand Challenges could take North Dakota even further.

“Upfront investments will return more money to the state,” said President Kennedy. “Investments by the Governor and Legislature will have an economic impact and spark a better quality of life for North Dakotans.”

Kennedy asked the five champions to detail how new investments could ignite opportunities to benefit North Dakotans, diversify the economy and address problems such as opioid addiction.

This is what they said.

UND can take coal from survival to success, said Tom Erickson, champion of the Grand Challenge to promote energy security and environmental sustainability and CEO of the UND Energy & Environmental Research Center (EERC).

Agriculture and energy power the state, and Erickson believes that an energy research center at UND, similar to the NDSU Agriculture & Extension Service, would help energy remain accessible, affordable and environmentally responsible.

The EERC has a record of leveraging state funding through federal and industry partnerships. For example, a project to generate ammonia using wind energy has transformed a $437,000 state investment into a $2.9 million payoff. Similarly, a UND carbon capture project which traps carbon dioxide emissions from a power plant and injects it into oil wells to boost output has netted $12.7 million from a $3.2 million state investment.

UND can do even more, said Erickson, to increase oil recovery while decreasing environmental impacts, and by harvesting rare-earth elements, activated carbon, cobalt and other high-demand products from coal.

A one percentage point increase in oil extraction, Erickson said, could yield $3 billion per year in state economic activity and hundreds of millions in state taxes. A state energy research center is the best path to unlock those benefits.

North Dakota has high rates of cancer, Alzheimer’s and substance abuse, with an aging population and health care disparities in rural and tribal areas, said Colin Combs, champion of the Grand Challenge to transform health care in North Dakota and Chester Fritz Distinguished Professor of Biomedical Sciences at the School of Medicine & Health Sciences, along with Marc Basson, associate dean for medicine.

Basson sees opportunities to reinvent health care across North Dakota by partnering with hospitals and patients to pioneer medical advances. The SMHS has received more than $50 million in federal funding over the last 15 years to examine such vexing questions as how environmental factors can lead to cancer, but has not focused on patient research.

An institute for clinical studies would take advantage of federal and private funding for clinical trials of medications and devices. Successful developments would benefit patients, save hospitals and patients money and improve health care across the state, as well as lower Medicaid expenses paid by the state.

An investment from the state would jumpstart the research while ensuring future returns with a healthier workforce, better access to health care and revenues from drug and device development. The program could be self-funded within a few years, said Basson.

“We could become the first medical school to partner with hospitals and reinvent health care across an entire state,” said Basson.

Along with access to health care, rural and tribal communities face social problems, such as opioid addiction, alcohol dependence and domestic violence, said Thomasine Heitkamp, champion of the rural health Grand Challenge and professor in the College of Nursing & Professional Disciplines. She is tasked with solving rural health and social problems.

“The needs are greatest in those rural and tribal communities,” said Heitkamp, who would like to focus on preventing addiction and other problems. She believes that an addiction research center, headquartered at UND and serving other states in the region, could harness addiction science and research, leading to better health outcomes and increased productivity. The center would work with other areas on campus, including nursing, medicine and social work. She also anticipates partnerships with NDSU and other institutions of higher education in the region.

“You can’t solve this problem in silos,” said Heitkamp. “This would save dollars, families and lives, and every dollar spent in treatment saves $4 to $7.”

A national leader in unmanned aircraft systems education and research that has pioneered its use in agriculture and energy as well as policy and law enforcement, UND could continue that lead when it comes to cyber security and data analytics, said Mark Askelson, champion of the Grand Challenge to drive the world-changing developments of UAS and interim director of the Research Institute for Autonomous Systems (RIAS).

The Institute for Unmanned & Autonomous Research has yielded major funding from the FAA for detect and avoid technology, and industry partnerships with companies such as Xcel Energy have yielded benefits for both industry and UND.

Askelson’s goal is to maintain UND and North Dakota’s leadership status by offering a rapid response team for use by the military, FAA, industry and government that could quickly offer applied research and technology. The team would use big data to, for example, model oil reservoir pools and increase cyber security.

“This could offer a big return to the state,” Askelson said.

UND already provides big data expertise as the lead institution in a multi-university project for digital agriculture, funded by the National Science Foundation, and it’s also co-lead in another NSF project to determine industry and academic computational needs in the Midwest.

UND can do more, said Grant McGimpsey, speaking of the Grand Challenge to effectively, efficiently and ethically produce, manage and securely use information and vice president for research & economic development.

“Big data is important to North Dakota,” said McGimpsey. “We can convert data to valuable information.” He added that agriculture, UAS, energy, utility, construction and transportation sectors all use big data, and it’s critical to enhance acquisition, storage, communication and security, as well as to convert the data to usable information.

McGimpsey is advocating a project that will conduct research and development to rapidly produce practical data solutions.

“This is a non-traditional, rapid response approach to industry research,” McGimpsey said, adding that it would leverage existing UND research and infrastructure, assemble experts from UND and NDSU, and form a laser-focused team to rapidly solve industrial data challenges. He noted that other institutions reap billions of dollars for such services, and UND could be a region-wide leader. 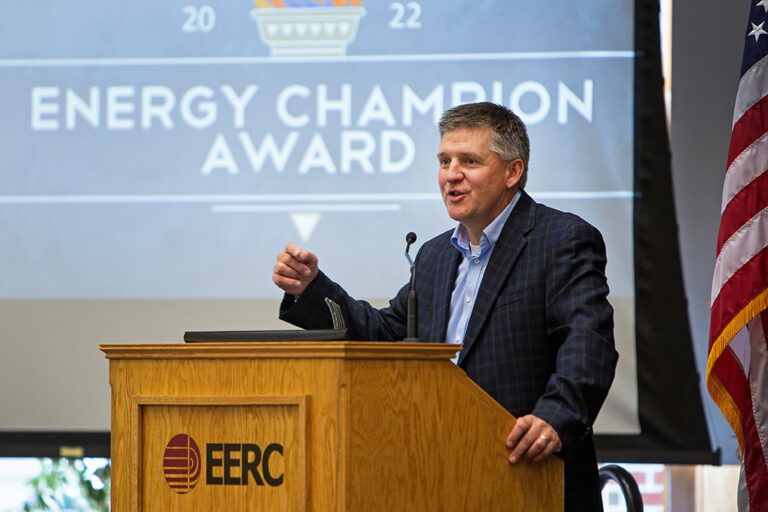