It’s something more than the February wind chill.

The chief flight instructor for UND’s helicopter training program is happy to have Army Reserve Officers’ Training Corps (ROTC) Cadets in the cockpits and behind the sticks once more.

For 30 years, until 2010, UND led a one-of-a-kind scholarship program putting 15 Cadets per year on the fast track to becoming Army aviators. Through appropriations in the National Defense Authorization Act, with the help of Sen. John Hoeven (R-N.D.), the program is making its return to campus this year.

“Historically, UND’s helicopter training was founded as a military training program,” Van Dell said, who’s been an instructor at UND since 2007. “The way we designed our course structure mimicked what the Army would do at Fort Rucker (Alabama), the Army Aviation Center of Excellence.”

In the past, Cadets graduating through the program could commission into the U.S. Army and bypass the first three months of training at Fort Rucker with their UND flight experience.

This new iteration of the program–the only one of its kind in the country–will supply the Army with: multi-dimensional officers.

Accepted cadets—once again capped at 15 per year—will have their flight training costs covered by federal funds, which is on top of their ROTC scholarship covering tuition and fees.

“For flight training, UND is already known as the preeminent aviation school,” Murphy said. “For the Cadets, it’s a great opportunity to be a much broader-based aviation student. When we have students going into the Army with four years of aviation experience, already, they’re more confident and have the ability to fill multiple roles.”

Not only is experience in the burgeoning field of UAS a benefit to their overall education, but it can provide a tactical advantage. Officers coming from experience in UAS, fixed-wing and rotary-wing flying will be better equipped to make the right call in an aerial situation, Murphy says.

Beth Bjerke, associate dean of the John D. Odegard School of Aerospace Sciences, considers this a win-win for all involved. She says it essentially doubles the number of students learning to fly helicopters at UND. For the Army, it’s value added on day one, after Cadets are commissioned.

“When I talk to any military contingency, this by far makes the most sense,” Bjerke said of the UAS dimension added to the program. “The biggest users of UAS, and the ability to fly beyond-visual-line-of-sight for missions, is the military. This degree is very applicable to a career in the military.”

By the time she graduates, she’ll have certificates and/or degrees in all three modes of flight – fixed-wing, rotary-wing and UAS. She points out that with UAS still being new to the aviation industry, it will be valuable to have the expanded knowledge.

“I feel lucky to be here when the program is new,” McKenzie said. “Next year, there will be a lot of people coming in for this opportunity. I feel honored to be chosen for it.”

Senior Devin Wobbleton was thrilled to hear it was coming back. The partnership between the University and Army ROTC was what got the Huntingtown, Md., native keyed into UND in the first place. He says it is fantastic timing that its return happened before he graduated with an airport management degree.

“I would have graduated in December with a private pilot certificate; now I’m allowed to continue until August of 2020 and get as many helicopter certifications as I can,” he said.

Wobbleton can’t find a way to describe what it’s like to fly UND’s helicopters, other than the fact it doesn’t handle like anything he’s driven or flown before.

Van Dell has been around UND long enough to see the helicopter program adjust from training Cadets, to training civilians and now transition to a combination of aspiring pilots. He says there’s a better foundation than ever for instructing ROTC Cadets.

“My past experience with Cadets has always proven that they’re extremely well-motivated,” he said. “Their professionalism has always been exceptional, as well. The professionalism required to be a full-time flight student is something that, for an 18 or 19-year-old, you wouldn’t really see anywhere else.” 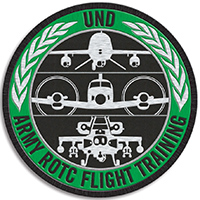 Professionalism is a quality Lt. Col. Murphy finds in partnering with UND Aerospace. The rapid turnaround from getting the defense appropriations to having Cadets in the air proved UND’s ability and capacity to be flexible and adaptable.

“Dr. Bjerke and her team have been outstanding in working with us and getting the program up and running, working with the students,” Murphy said.

“It is very uplifting to see a great program like the Army Flight Training program return to the University of North Dakota,” Dean Paul Lindseth told UND Today. “This has always been a cost-effective way to train future Army aviators, and we thank Sen. Hoeven and his staff for their outstanding support to bring this back to UND.”

National leaders, elected by their peers