In the History Department of the University of North Dakota, Jerome “Jerry” Tweton remains a larger-than-life figure.

In his 30-year tenure at UND, he was an educator who inspired both students and faculty, a chair credited with the creation of the modern department, and a historian with a flair for both academic research and popular narratives.

Upon learning of Tweton’s death, “I just felt very, very sad,” said UND history professor James Mochoruk. “Because you don’t have people like him in your life every day.”

Having left an indelible mark on UND’s History Department, Tweton is often remembered as a good-natured Midwesterner, a gentle leader, a prolific scholar and a great storyteller.

A native of Grand Forks, Tweton obtained a bachelor’s degree from Gustavus Adolphus College in St. Peter, Minn., before coming back to his hometown to receive a master’s degree from UND.

He earned his Ph.D. at the University for Oklahoma with a dissertation on Theodore Roosevelt, who, to an extent, became a sustained focus of Tweton’s scholarship.

Before arriving at the UND history department in 1965 and soon becoming its chair , Tweton taught at Dana College in Blair, Neb.

A leader of an overhauled department

At UND, Tweton “was, of course, the face of our History Department,” said Mochoruk.

Tweton also grew the number of faculty and the volume of their research.

“He’d been responsible for hiring probably two-thirds of the people that were there,” said Porter, who in 1996 replaced Tweton as the North Dakota history expert at the University.

Moreover, according to a centennial newsletter by the UND History Department, Tweton kept healthy enrollment tallies in a time when relaxed graduation requirements across many of the country’s universities deflated students’ interest in history courses.

Tweton did so by championing a type of course that met only once a week for two months (conferring a single credit) and allowed professors to teach whatever historic topic they fancied. Many classes focused on popular culture themes such as Jazz, Tarzan and John F. Kennedy’s election, and used innovative teaching tools such as film. Those features made them attractive to a broad array of students.

“He had, in many ways, a soft touch, and he would go out of his way to work for students,” said Mochoruk.

A supporter of faculty

Tweton would extend the same kind of support to his faculty. He encouraged Mochoruk and Porter as young peers, even though his time at UND barely overlapped with theirs.

“He was very important to me at an early stage in my career here,” said Mochoruk.

Although Tweton retired only a few years after Mochoruk arrived on campus, it was Tweton who urged Mochoruk to pursue the research interests – including Canadian and Canadian-U.S. studies – that animated the younger scholar.

And even before their formal working relationship at UND, the two men’s bond started to shape up during Mochoruk’s interviews for a position at UND. At that time, Tweton was taking a break from his role as the departmental chair.

Despite a blizzard on the day Mochoruk drove to Grand Forks from Winnipeg, Man., Tweton welcomed him at a local hotel.

“He not only interviewed me, but also told me about everyone I was going to be meeting over the next few days and how it was going to go,” Mochoruk said. “He gave me some very sage advice about what to do and what not to do with some of the folks. He was very kind, and really sort of looking after new people.”

When Porter came to UND to take over Tweton’s course load, she quickly learned of Tweton’s educational and scholarly heft. Students would often inquire whether Tweton was coming back. People would tell Porter she should meet him.

When she finally did meet Tweton, she asked him how she could possibly teach North Dakota history at UND after he had done so for 25 years. Tweton’s shoes seemed too big to fill.

She remembered him saying “Hey, try filling for Elwyn Robinson,” the legendary professor who’d taught before Tweton, had written the definitive guide to North Dakota history and given his name to the University’s Department of Special Collections.

“I just appreciated Jerry,” Porter said. “He gave me a little bit of push when I came here.”

A leader at UND and the state

In the fall of 1966, in the Student Union, Tweton hosted the inaugural Northern Great Plains History Conference, which continues to be held annually.

The impetus for the conference had come to Tweton a year earlier, on a plane flying back from the pricey American Historical Association meeting in New York, where – in part because of the expense – he was one of only two North Dakota historians to attend.

He wanted a regional, “relatively inexpensive” event for historians to share their insights, writes William Lass in his “Historical Sketch of the Northern Great Plains History Conference.”

Years later, Tweton was the first person to receive the Remele Award for his “significant contributions to the betterment of the conference.”

Even after his retirement, Tweton continued to partake in the yearly gatherings.

In fact, the last time Mochoruk saw Tweton was at the Northern Great Plains History Conference almost two years ago. Tweton, who at time was about 84, was on a panel discussing the Nonpartisan League.

“He had slowed down physically,” said Mochoruk. “But his mind still sparkled.”

At UND, Tweton was named a Chester Fritz Distinguished Professor and Professor Emeritus. 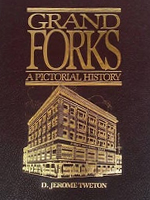 Aside from being a prominent educator and leader in his discipline, Tweton was also a prolific author. He began publishing articles in graduate school and, in 1986, went on to write what many consider his best-known work, “Grand Forks: A Pictorial History.”

“I love the fact that he wrote well enough that he could go well beyond the academic sphere and reach out to a broader audience,” said Mochoruk.

But when asked for his own favorite Tweton tome, Mochoruk cited “The Marquis de Mores: Dakota Capitalist, French Nationalist.” It came out in 1972 and was Tweton’s first major book.

The marquis was a frontier ranchman in the state’s Badlands and a neighbor of Theodore Roosevelt’s, whom Tweton researched as well.

Conducted mostly after his retirement from UND, Tweton’s work on Roosevelt comprised what Mochoruk dubbed a final “capstone” project in coordination with the North Dakota State Historical Society.

In 2011, Mochoruk helped secure a grant from the North Dakota Humanities Council for a UND lecture in which Tweton presented his “final set of assessments on Teddy Roosevelt.”

“We had an incredible turnout,” said Mochoruk. “We had people from all over the state coming. To be hosted here at UND was really important to him and to the North Dakota State Historical Society.”

While Porter also reflected on the popularity of “Grand Forks: A Pictorial History,” she – like Mochoruk – had a different book in mind when asked to pick a favorite.

After a few seconds of consideration, she chose “Years of Despair: North Dakota in the Depression,” a record of the Great Depression that Tweton co-authored with Dan Rylance.

In her office, Porter keeps a copy of it – a yellowed, slightly tattered one. Tweton had signed it himself for Thomas Howard, a fellow UND history professor: “With personal regards to Tom Howard, colleague and friend.”

When Howard retired, he passed the book to Porter. Today, she uses it in her North Dakota history course.

“I have respect for and use his books,” said Porter. “And as long as people use your books, you’re still an active scholar.”

A tribute to Tweton will be held in Grand Forks in spring 2020.