For the good of the game

For a self-described ‘mediocre’ golfer, Joe Beditz ’76 has done pretty well in the world of golf

If you are a golfer, prepare to be envious of the career Joe Beditz, ’76, has carved out for himself after graduating with a degree in social work from UND.

Joe is the president and chief executive of the National Golf Foundation, a trade organization that advocates for the growth and vitality of the game. The NGF claims membership from club manufacturers, golf courses, course designers, golf stores, clothing manufacturers and golf ball companies. All facets of the golf industry look to the NGF to conduct research that can help them grow the game and their businesses.

The job has many perks, including attending PGA tournaments and the Masters Tournament every year, but Joe says his favorite is working with some of the biggest names in the golf industry. The current board of directors for the NGF includes leaders of Troon Golf, Ping, TaylorMade, PGA Tour Superstore, Toro, and NBC Golf. Also on the board is 10-time major winner and World Golf Hall of Famer Annika Sorenstam.

“The commercial side of the business is where I’ve spent my life and made my greatest friends and colleagues,” said Joe from NGF headquarters in Jupiter, Fla.

Joe found himself at UND after being stationed as an airman at Grand Forks Air Force Base. In his last year in the military, he enrolled fulltime at UND. He says he was able to take on the workload because he scheduled himself to work an overnight shift at the base, so he could study. Once out of the Air Force, he finished up his degree while working overnights at a Valley Dairy convenience store, where he could again use down time to study.

In addition to his social work degree, Joe got a minor in computer science, which helped him land a graduate assistantship at Florida State University.

“They offered me an assistantship because I had some real skills in terms of statistical analysis, which few people in social work had.”

Joe found he had an affinity for statistics and ended up getting a doctorate in education research and measurement.

His academic success seemed unlikely given his admittedly subpar high school grades and the fact he had dropped out of community college before joining the Air Force.

Once Joe earned his doctorate, he started a company with some fellow graduates that focused on instructional design and evaluation. One day, while visiting a college to interview a content expert, Joe found a job posting for Director of Research at the National Golf Foundation. Having picked up the game of golf after taking a one-credit class on UND’s Ray Richards Golf Course, he was intrigued and decided to apply. He’s been with NGF ever since.

The NGF started in 1936. It maintains a database of every golf course in the world, now totaling about 34,000 facilities. It also conducts research that measures golf participation in the U.S. and studies how golf courses operate to provide members with the best practices associated with golf course management.

Additionally, all that research helps the NGF formulate strategic plans for growing the game of golf.

“What most people don’t realize is golf is the highest participation sport of all,” Joe said. “About one in nine people in the United States participates in golf either on-course or off-course [driving ranges or indoor simulators].”

The game of golf is thriving in the U.S. during the pandemic as people look for outdoor recreation. The NGF reports that after rounds played tanked in April (down 42.2% from April 2019), play in May, June, July and August was up substantially in comparison to 2019.

Joe says people always ask if he is a good golfer, but they are usually disappointed when he tells them his golf game “has been mediocre at best throughout my life.”

Given the NGF’s close association with major club manufacturers, Joe says he’s “the most over-equipped and under-skilled golfer on the planet.”

By Milo Smith. This story originally appeared in the UND Alumni Magazine. 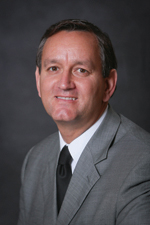