Drawing on her own student-research experiences, Legerski prioritizes student involvement in her current projects 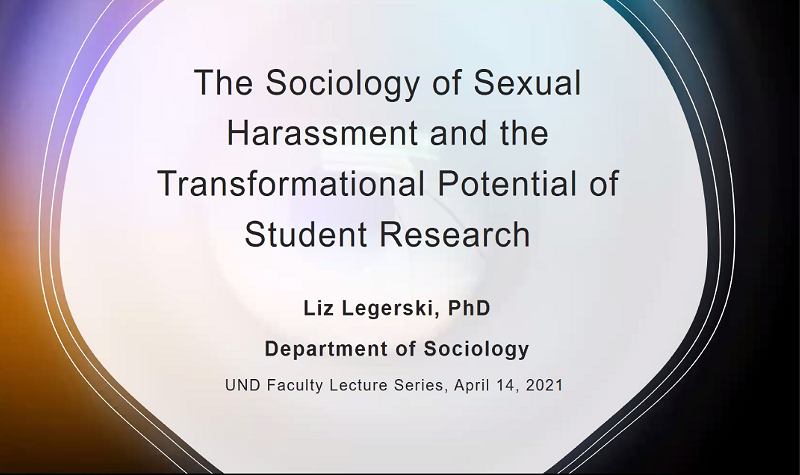 Sociology is a discipline that rarely examines happy topics; it typically zooms in on social problems, said Liz Legerski, associate professor of sociology at the University of North Dakota.

“Sociology can get a bad rap for being the Debbie Downer of the party,” she said as a way of introducing her research during the latest installment of the Faculty Lecture Series, which took place via Zoom on April 14.

But despite their serious subjects, sociologists are not pessimists. In fact, sociological perspectives strive to create a better world, “which is an optimistic pursuit,” Legerski said.

Legerski, who arrived at UND in 2010, has focused her most recent research – which blends qualitative and quantitative methodologies – on sexual harassment and violence. She also tries to use this work to provide research opportunities for students.

Titled “The Sociology of Sexual Harassment and the Transformational Potential of Student Research,” Legerski’s lecture combined these two aspects of her career at the University.

Legerski, a first-generation college graduate, knew little about research when she applied to be a student research assistant after seeing the job advertised at her alma mater, Brigham Young University. The position required collecting historic data on the women’s suffrage movement.

During her talk, she reminisced about her job interview. The professor asked a series of questions about her proficiency in Microsoft Access (a database management system), plus her prior research experience and knowledge of the suffrage movement. Legerski hadn’t heard about Access before, she had done no research, and all she knew about women’s suffrage was that it meant women have the right to vote.

“The professor just blurted out, ‘Well, do you think you can learn this stuff?’” Legerski recalled.

Yes, she responded. She got the undergraduate assistantship, which was funded through the National Science Foundation.

Legerski credits that experience with changing her trajectory and motivating her to pursue a graduate degree and later a Ph.D.

“Undergraduate research improves the odds of pursing graduate studies among underserved and underrepresented students,” she said. “This is especially true among groups of students who haven’t previously anticipated graduate studies.”

In graduate school, Legerski formed an interest in the topic of gender inequalities, which is now her research expertise. Soon after starting at UND, she became a part of a multidisciplinary research project, funded through the National Institute of Justice, that explored the impact of the oil boom in North Dakota and Montana on domestic and sexual violence.

Together with UND colleagues Thomasine Heitkamp, professor of nursing; Roni Mayzer, associate professor of criminal justice; Tracy Evanson, professor of nursing, as well as with Dheeshana Jayasundara, associate professor of social work at Fresno State, Legerski set out to answer a series of questions. Did the thriving oil industry in the 2000s and 2010s, which substantially increased the male population in western North Dakota and eastern Montana, lead to more incidents of sexual violence? If so, were the changes the region experienced consistent with what one could expect with population growth? Or, were they unique in their nature and geographic concentration?

The team examined data from 33 counties spanning the neighboring states. Controlling for population growth, they observed statistically significant spikes in domestic violence (a 47% increase) and dating violence (a 72% jump) in the Bakken region from 2008 to 2014. The number of sexual assault victims seeking services also rose, by 55%.

Aside from collecting quantitative data, Legerski and her fellow researchers conducted interviews with 185 individuals who worked or lived in the oil patch. The interviewees included survivors of assault.

“One of the things that I just love about qualitative data collection and analysis is that you get to hear people’s stories,” Legerski said. “I’m always surprised by how willing people are to share their life experiences with a stranger.”

Combined, the qualitative and quantitative analyses confirmed the gendered risk of violence in the Bakken, where the economic changes prompted by the oil boom exacerbated social inequalities. The contexts, which shaped this, Legerski said, included a gendered division of labor, lack of affordable and sufficient housing, and social isolation.

The prominence of the Bakken research led Legerski to a collaboration with researchers from across the country, tracking sexual violence in college communities. From 2017 to 2019, Legerski collected data on UND students’ experiences of sexual violence and perceptions of the University’s response to allegations.

She found that more than 60 percent of the students surveyed believed UND would support a person reporting violence and take needed action.

“Student perceptions are important,” Legerski said. “If they think the University is going to be helpful, they are more likely to report incidents of harassment.”

To analyze the data that was collected, Legerski recruited students. Those who worked with her were able to devise their own research questions and analyze the responses.

Together with researchers, Legerski now is working on several other projects that explore sexual harassment in different contexts, such as the restaurant service industry and student field placements.

“Student research opportunities open the eyes of our students and instill in them a passion for research and inquiry, which is not only the heart of academia, but is also necessary for the production of knowledge in a free and democratic society,” Legerski said.