by Dima Williams
Published in: School of Law

Lamoureux-Davidson was the keynote speaker at the virtual event, which celebrated the legacy of Helen Hamilton, the first female graduate of the School of Law and a pioneer in the legal field.

“The Law Women’s Caucus hosts this event to carry on the legacy of Helen Hamilton by empowering female voices within our student body and in the legal community,” said Priscila Ulloa, a second-year law student and the Helen Hamilton Day coordinator.

The event consisted of three panels that focused on different modes of empowerment – political, educational, economic and social. Among the panelists were former U.S. Sen. Heidi Heitkamp, North Dakota State Rep. Karla Hanson and a number of accomplished attorneys, judges and law professors.

“At the core of this year’s theme was the idea that the future of women’s rights and success depends on a strong pipeline of diverse leaders from different movements,” Ulloa said. “We wanted to illustrate the importance of male allies in the community and how their support can help amplify the voices of their female colleagues. Our main objective was for our listeners to leave the event inspired and empowered to make meaningful contributions in their own communities.”

The pursuit of equitable treatment in women’s hockey

Taking the virtual stage at lunch time last Friday, Lamoureux-Davidson reminisced about her and twin sister Monique Lamoureux-Morando’s upbringing in Grand Forks (together with four brothers) as the backdrop for their activism and pursuit of fair treatment in international hockey. 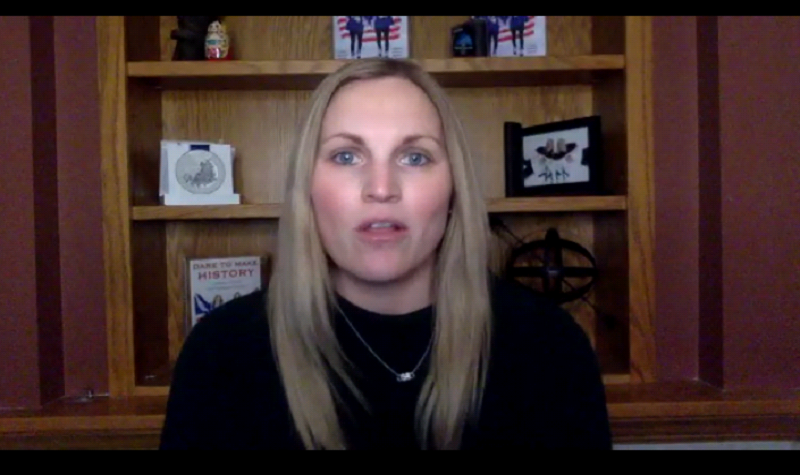 “My mom and my dad put us in a ton of different sports growing up,” she said. “We were very fortunate. There was no differences in what our mom signed us up for versus what our brothers signed up for. Basically, the only sport she didn’t allow us to play was football in seventh grade.”

The sisters made the U.S. women’s hockey team when they were 17 years old. After playing hockey at the University of Minnesota, the two transferred to UND, where they finished their collegiate careers.

In 2015, shortly after graduating from UND, the Lamoureux twins spearheaded a years-long negotiation between the women’s national team and USA Hockey, the governing body for organized ice hockey in the country, demanding compensation and support equitable to what the men’s team received.

“My sister and I and a group of teammates said, ‘Enough is enough,’” Lamoureux-Davidson said. “‘If we want to create change, we have to do something. If we just keep talking about the way things are, we’re just commiserating and not doing anything positive about what’s going on.’”

Lamoureux-Davidson reached out to Attorney John B. Langel, who, for years, had represented the U.S. women’s soccer team, which is frequently considered the standard for gender equity in sports, she said. Langel agreed to represent the women’s hockey team pro-bono.

As the negotiations with USA Hockey dragged on, Langel advised the team that a successful outcome would likely depend on leverage as an incentive for the governing organization to ink an agreement.

“We told him that the U.S. was hosting the 2017 World Championships, which was going to lead into the 2018 Olympics,” Lamoureux-Davidson said. “He basically said, ‘Circle that. That’s going to be our biggest pressure point if we don’t come to an agreement.’”

Two weeks before the 2017 World Championships, with no agreement reached, the team announced a boycott. Support for the team poured in. Some 20 U.S. senators, including Heitkamp, penned a letter to U.S. Hockey calling for fair treatment.

“USA hockey tried to replace all the players,” said Lamoureux-Davidson.

Eventually, the team and USA Hockey reached an agreement with only days to spare before the World Championships. The team flew out to Detroit, where the competition took place, practiced only once and went on to win the title.

“The most empowering thing about that moment and about that experience was that it wasn’t just about me or a couple individuals,” Lamoureux-Davidson said. “It was about a group of women who didn’t just want to win medals and to wear the Team USA jersey. It was also about making a difference and having an impact beyond just playing hockey and trying to score goals.”

The 2017 contract was set to expire at the end of last month. It has been extended for three months to cover the team’s participation in the upcoming 2021 World Championships. The Lamoureux twins will not wear their jerseys at the tournament, though; after 14 years, they recently announced their retirement from the women’s national team.

But they plan to stay involved, said Lamoureux-Davidson. She is also hoping to start a dialog with UND about reinstituting its women’s hockey team, which was cut in 2017. The sisters used to coach at the University.

Addressing female attendees in her final remarks at the Helen Hamilton Day last week, Lamoureux-Davidson said, “As lawyers and going through law school, you’ve learned that being in a male dominated fields, it’s not always easy to step up and to voice an opinion, especially if it differs from the majority. But you have to empower each other and really lift each other up.”