Shining light on a dark secret: Civilian internment in Canada

A book about civilian internment in Canada that was co-authored by Jim Mochoruk, Chester Fritz Distinguished Professor of History at the University of North Dakota, has been named the Best Scholarly Book of 2020 by the Manitoba Historical Society.

Civilian Internment in Canada, edited by Mochoruk and Rhonda Hinther, a history faculty member at Brandon University in Manitoba, has won the Margaret McWilliams Book Prize, one of the oldest literary awards in Canada. 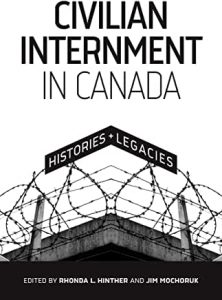 The book is a collection of scholarly articles on the several episodes of civilian internment in Canada, from World War One to the present. It also includes several first-person accounts by survivors and the children of survivors on internment camps in Canada.

“I hope the book encourages people to think about the incredible fragility of civil liberties and human rights,” Mochoruk said. “In a democracy like Canada, which prides itself on being multicultural and inclusive, these things are still very frail.”

Mochoruk said that the book tells the stories of those who were interned in a way that will help readers understand how often civil liberties have been violated because people didn’t look the same as someone else, or believed something outside the norm.

Jim Mochoruk joined the University of North Dakota faculty in 1993. A distinguished teacher and prolific researcher, he has won multiple awards, including the North Dakota Spirit Faculty Achievement Award, the Faculty Star Presidential Scholars Award, and several awards for teaching, research and scholarship.

He has served as chair of the University Senate as well as chaired the UND history department, and is a prolific academic author and publisher. He specializes in Canadian, Canadian-U.S., British and British Imperial History. He has been heavily involved in the creation of the Canadian Studies Program at UND. Related to his work in northern and western Canada, Mochoruk has also developed a strong interest in First Nations history on both sides of the Canada-U.S. border, and works closely with UND’s Department of Indian Studies.

This is the third McWilliams award for Mochoruk. He also received the award for his books, The People’s Co-op: The Life and Times of a North End Institution (2000), and Formidable Heritage: Manitoba’s North and the Cost of Development, 1870 to 1930 (2005).

Rhonda Hinther is a member of the history department at Brandon University. A former curator of Western Canadian History at the National Museum of Civilization at Gatineau, Quebec, she as also served as head of exhibits research at the Canadian Museum of Human Rights in Winnipeg.

A memorial to feminist and historian to Margaret Stovel McWilliams, the Margaret McWilliams Book Prize is one of the oldest literary awards in Canada and encourages the study and interpretation of the history of Manitoba. It was instituted in 1955 by the Manitoba Historical Society.