A bachelor’s degree: a goal 50 years in the making

After 50 years of taking courses from a variety of universities, Daniel Bernhard graduates with a bachelor’s degree in General Studies from UND 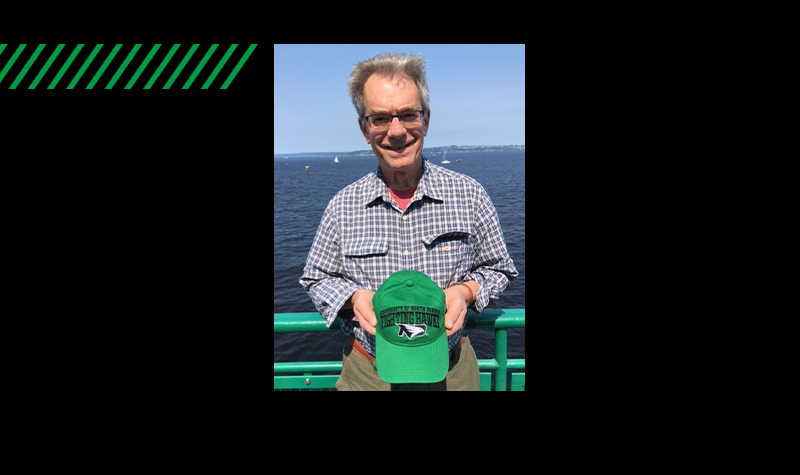 Three days before Daniel Bernhard turned 74, he reached a milestone that has been in the works for some 50 years. He graduated with his bachelor’s degree in General Studies from the University of North Dakota.

About two years ago, Bernhard was still some 30 credits – about 10 courses – short of a diploma. For his “last big push to finish my degree,” he began taking online classes at UND, the latest institution in a string of universities he has attended, while raising a family and building a career. There were classes from Arizona State University, University of Washington, North Seattle Community College, University of Alabama, Northern Colorado University and Ohio University.

“There are probably some I’ve forgotten,” Bernhard said with a chuckle.

Yet, Bernhard is much more than the tired tale of a mature student who perseveres through life to obtain a college degree. With an inquisitive and open mind, he has pursued opportunities that satiated his interests. And, Bernhard has a lot of interests.

“I never really settled on one thing that really captured my imagination,” he said. “I am interested in perhaps too many things. That’s why ultimately I settled on getting a degree in General Studies.”

With a curriculum that easily bends to accommodate students’ interests and aspirations, General Studies “is a flexible degree” that can lead to a variety of careers, said Angela Cary, academic advisor at the College of Arts & Sciences. Cary was Bernhard’s advisor at UND. She spoke highly of his commitment to education. Every semester, she said, he would check in with her to ensure he was on track for graduation.

And now, graduation has become reality for Bernhard.

Born and raised in Flint, Mich., Bernhard moved to Seattle, Wash., in 1968. Together with his wife, he has raised two daughters, who are both educators now. In the early 1980s, he obtained an associate of applied science degree, which translated well into what Bernhard did for a living for more than two decades.

Prior to retiring almost eight years ago, Bernhard was an estimator for a company that implements computer controls in water and wastewater treatment facilities. Since then, he has written a play and taught former inmates studying for the GED, among other things.

“When I retired, I knew that I wanted to have relevance and engagement in my life,” Bernhard said. “That was critically important to me. And after trying a number of different things – volunteer work – I was presented with this opportunity to teach the math portion of the GED.”

Although Bernhard had never been a teacher, he took on the challenge. His associate degree along with the professional skills he had acquired in his career served him well in the role of a tutor. While the job came with its own trials, in it, Bernhard found the fulfilment he sought in his retirement.

“The interaction that you have with somebody who’s struggling, who is playing catch up in life, it’s challenging and it’s also rewarding,” Bernhard said. “It’s the kind of activity that captures a person. You become engaged with people, and you become concerned with how they’re progressing. It’s an exchange. I don’t feel like I’m giving back. I feel like I’m gaining. It’s truly a collaborative effort with these folks.”

Being a GED teacher strengthened Bernhard’s resolve to complete his undergraduate education. A bachelor’s degree would lend him more credibility as an instructor. For most of his life, Bernhard didn’t have a step-by-step roadmap to a diploma, much less a timeframe. Instead, he took courses that piqued his interest – writing, psychology, statistics, economics – when he had the time for them. But when COVID-19 shuttered most in-person activities in 2020, Bernhard doubled down on classes.

In addition to offering enroll-anytime online classes, UND allowed Bernhard to transfer course credits he earned decades ago. Other universities often impose a “use by date” policy for transfer credits, which typically has a time limit of up to 10 years.

“One of the reasons I picked UND is they allowed me to transfer the credits that I had started accumulating as far back as 1967,” Bernhard said.

The first course he took at UND was social psychology. Then, he enrolled in classes ranging from the sociology of sport to research methods. Conducted online, the courses followed an “orderly and coherent” structure, and Bernhard found the technology needed to access class materials and interact with professors and peers easy to navigate. Overall, Bernhard largely enjoyed his time as a UND student. The disciplines and topics he explored at UND helped him better understand and serve his GED students, he said.

“My experience as a student overall in all these years is integral to the life experience that I would wish for anybody in that, hopefully, one never knows what opportunities are going to be presented as you make your way through life,” Bernhard said. “You should remain open to the potential for something new to arise and to allow those things in that you would have never imagined for yourself.”

With a life-long goal fulfilled, Bernhard is now refining a play he wrote in response to a mass shooting. He is also contemplating his next big step in life.

“People ask me, are you going to get a master’s degree now. And I reply, no,” Bernhard said, laughing. “But, I am thinking about it now. A buddy of mine told me recently, ‘I think you’re going for your master’s.’ I think he might be right.”