In honor of Fritz Pollard Jr., Olympian and UND Hall of Famer 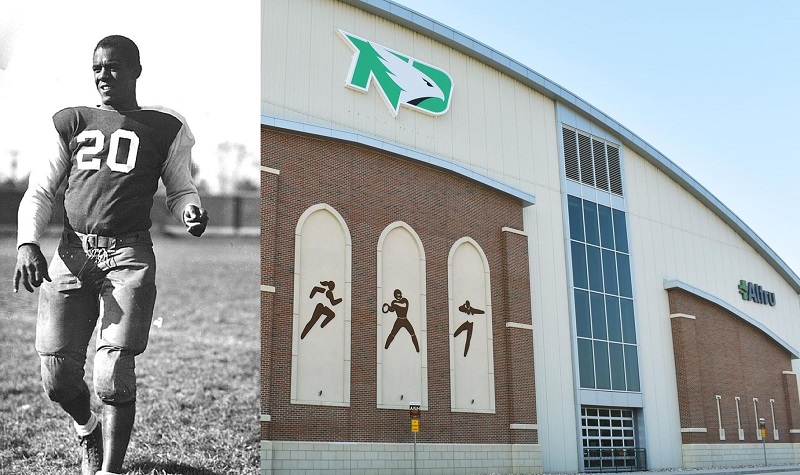 The University of North Dakota will dedicate the Frederick “Fritz” D. Pollard Jr. Athletic Center at 2 p.m. Friday, Sept. 17, in the mezzanine of the Athletic Center.

Formerly known as the High Performance Center, the building is the primary indoor training facility for many of UND’s athletic teams.

“We do not take naming a building lightly,” said UND President Andrew Armacost in February after the State Board of Higher Education voted unanimously to rename the building in Pollard’s honor. “With Fritz Pollard Jr.’s name attached to the High Performance Center, we are telling our student-athletes and the community that we are incredibly proud of this remarkable alumnus. His accomplishments as a student-athlete, an Olympian, and in life are something to hold up as admirable and worthy of historical recognition.”

Frederick “Fritz” Pollard Jr. was part of the University of North Dakota Athletics Hall of Fame’s initial class after a standout career in football, boxing and track and field. In 1939, he was one of the school’s first African American graduates. In 1936, he earned a bronze medal as part of the U.S. Olympic track team in Berlin. A WW II veteran, he was one of UND’s biggest supporters.

The program will be led by DeAnna Carlson Zink, CEO of the UND Alumni Association & Foundation. The guests of honor will be Fritz Pollard III, the son of Fritz Pollard Jr., and Meredith Pollard Russell, the granddaughter of Fritz Pollard Jr. UND President Andy Armacost will be the keynote speaker, followed by Athletics Director Bill Chaves and Football Head Coach Bubba Schweigert.

Fritz Pollard III, while lives in Frederick, Md., will also serve as Grand Marshal at the Potato Bowl Parade Saturday at 10 a.m.

“It feels great to know he is being recognized in this way,” said Pollard III in a statement. “I know how much my dad loved going to the University and visiting after he graduated. He just loved it up there. It’s a tremendous honor for him to have his name on a building.”

The Fritz Pollard Jr. Athletic Center was built with donor funding in 2015. The state-of-the-art practice facility features a 100-yard football field and an 8-lane, 300-meter meter Mondo Super X surface track, the same used at the Olympics. Bleachers were added to the 155,000-square-foot facility in 2019.

This year, the facility showed its value as traditional fall sports moved to the spring. Without this practice facility, spring soccer and football seasons would have been nearly impossible. The Fritz Pollard Jr. Athletic Center has also shown its multi-purpose use by hosting national collegiate drone racing and serving as a community COVID-19 testing site.

The UND Alumni Association & Foundation is currently raising funds to build Phase II of the project, which will include a weight room, locker rooms, a student-athlete academic center, sports medicine facilities, and coaches’ offices.

Pollard Jr. was a triple-threat football star at UND, earning all-conference honors three times and was named to the Little All America team in 1938. He was a member of the U.S. Olympic track team, winning a bronze medal in the high hurdles in the 1936 Olympic Games at Berlin, Germany, despite a serious leg injury suffered aboard ship en route to Berlin. He was leading the race, but tripped over the next-to-last hurdle and still finished third.

After serving in the Army during World War II, Pollard Jr. taught physical education in Chicago. He later worked as human relations commissioner under Mayor Richard J. Daley. During the Kennedy administration, he began working for the U.S. State Department, coordinating goodwill visits abroad by U.S. athletes. He supported UND and UND Athletics for the rest of his life. He passed away in 2003.