A tribute to Norm Skalicky

The business executive and benefactor shared his fortune with many — including his alma mater, UND 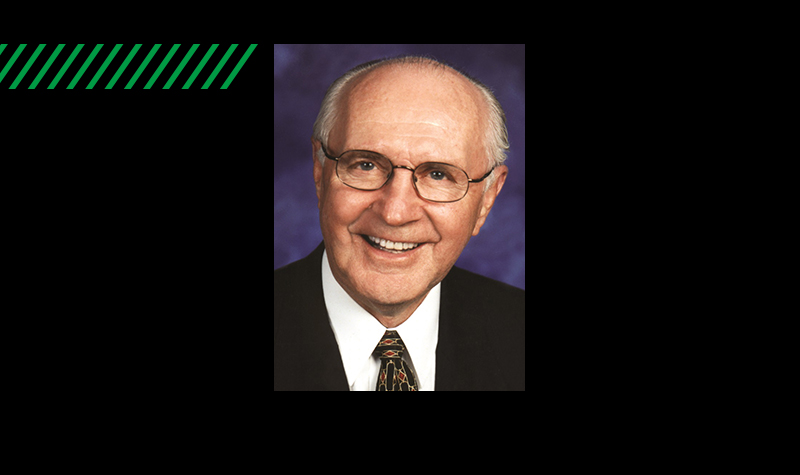 Skalicky, 87, was a Horatio Alger success story of the 20th and 21st centuries, one who always took time to credit UND with helping him get his start. A self-described “scared farm kid” when he left the family farm in Brocket, N.D., to enter UND, Skalicky graduated in 1955 with an accounting degree.

In 1966, Skalicky acquired two small banks that would eventually become Stearns Bank in St. Cloud, Minn. And by the 2000s, Skalicky had become one of most successful community bankers in America. But don’t take our word for it: “Stearns Bank ranked as top community bank in the nation,” the St. Cloud Times headlined in 2014, reporting on a finding by the Independent Community Bankers of America.

By the way, the Times in that story quoted the then-CEO of Stearns Financial Services: none other than Norm Skalicky, age 80 at the time. Skalicky “vows he’ll never retire,” the story reported, and the gentleman wasn’t kidding: Skalicky stepped down as chairman of the Stearns Bank National Association Board in late October of this year, just over a week before he died.

Getting the job done

Stearns Bank today is a nationwide financial institution with over $2.4 billion in assets, Skalicky’s obituary in the St. Cloud Times reported.

Heather Plumski, Stearns’ chief financial and strategy officer, was asked earlier this year about the bank’s success. One key is the bank’s warm family atmosphere, Plumski said. But as the story reported:

“While Stearns Bank has the close-knit environment you’d expect from a family-run institution, Plumski says not to mistake that for avoiding hard work. ‘Family means you are in it to get the job done, whether you’re in the heat of harvest when you’re putting up hay or rock picking in the spring,’” she says. ‘You’re doing tasks together that need to be done. A family works through that together and enjoys the benefits together.’ ”

Meanwhile, Skalicky’s keen business and management senses were matched by his decades-long philanthropy, generosity and community spirit. UND faculty, staff and students may already know this fact. After all, this story is being written on campus in the Skalicky Tech Incubator – now home to the UND Marketing & Communications Department – and Skalicky was a member of UND’s William Budge Circle. That’s the group which recognizes UND donors who have given between $1 million and $5 million.

“He is one of those true North Dakota natives that’s really a great leader and an entrepreneur, who never forgot his home state and never forgot his alma mater,” said DeAnna Carlson Zink, CEO of the UND Alumni Association & Foundation, to the Grand Forks Herald last week.

“He was very proud of both, and we are proud and thankful for all the impact he has had on many UND students.”

Less familiar to many in Grand Forks might be Skalicky’s long history of philanthropy in the St. Cloud region. At the bottom of Skalicky’s St. Cloud Times obituary is this note:

“St. Cloud philanthropist gives largest gift in Boys & Girls Clubs of Central Minnesota’s history.” The $5 million gift from the Norman C. Skalicky Foundation will generate income of $250,000 a year, a huge boost for the nonprofit that serves about 6,500 youngsters in the region, the story reported.

“It’s an incredible gift and will positively impact the Boys and Girls Clubs for generations to come,” spokeswoman Aimee Minnerath said in the story.

In 2004, Skalicky visited Grand Forks to watch the dedication of the Tech Incubator building in his name. “I never imagined in my wildest dreams that there would be a building with my name on it,” Skalicky told about 100 people gathered at the Center for Innovation, the Grand Forks Herald reported.

Here’s more from that story:

“Skalicky, in his own words, ‘choked up’ at times during his dedication speech, which was attended by his mother, a brother, three of his four grown children and some grandchildren.

“ ‘This is a great honor, even though this seems to go against what I learned in my childhood — and that’s humility,’ Skalicky said.”

At the event, Tim O’Keefe, then-CEO of the UND Alumni Association and Foundation, talked about Skalicky’s remarkable career and extraordinary generosity. Then in his parting words, O’Keefe spoke not only for UND and its alumni, but also for St. Cloud and the rest of central Minnesota, when he said: