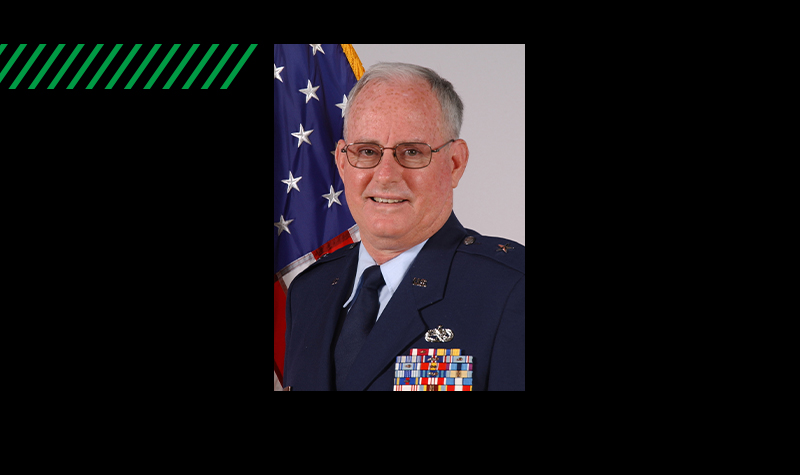 In 2017, following his retirement as director of UND’s UAS Center for Education, Research and Training, Brig. Gen. Alan Palmer told UND Today, “I’ve been blessed with a great career. I did everything I wanted to do in aviation, except go into space.”

With Palmer having flown close to 10,000 hours since first learning to fly at UND in 1976, earning licenses and certifications for multiple aircraft, and attaining flag officer rank in the North Dakota Air National Guard, it’s easy to believe he meant it.

This past week, Palmer died at the age of 69 in Grand Forks.

Through more than 30 years of service to UND Aerospace, Palmer managed one of the nation’s largest flight training programs and later helped lead the country in UAS education and research. His military career saw him rise through the enlisted ranks all the way to retiring as brigadier general. Palmer’s contributions and legacy – on both fronts – will resonate for years to come, according to his peers.

“His legacy is the number of students who benefited from his decades of leadership and service,” said Robert Kraus, dean of the John D. Odegard School of Aerospace Sciences. “I had the pleasure of meeting Al shortly after my arrival at UND, and I could clearly see the positive impact his dedication had on our flight training and UAS programs.”

Dick Schultz, UND’s director of flight operations, said he was fortunate enough to work with Palmer for many years in managing the University’s flight training.

“Al was a tremendous individual and a great mentor,” Schultz said. “What I remember most about him was that nothing was impossible, in his eyes. There was always a way, and he wouldn’t quit trying until he found it.

“Al continued John Odegard’s spirit at UND Aerospace, which continued to push us to be better, as well as unafraid to venture into the unknown. He will be truly missed.”

One of the original UND ‘young guns’

Palmer’s time at UND began when he took night classes under the tutelage of John Odegard, working to finish the college degree he left behind when he was drafted into the U.S. Air Force during the Vietnam War. Palmer was enlisted as a B-52 electronics warfare specialist and was stationed at Grand Forks Air Force Base in 1975, following an assignment at the U-Tapao air base in Thailand, according to the Grand Forks Herald.

Palmer’s work on his degree blossomed into a career at UND following his active duty service in 1978. In 1981, he joined the North Dakota Air National Guard as a maintenance officer.

Palmer flew close to 6,000 hours as an instructor pilot, and later was heavily involved in establishing UND’s first international training programs. According to Chuck Pineo, CEO of the UND Aerospace Foundation, Palmer is a well-known figure in Taiwan, having given hundreds of China Airlines pilots their FAA practical tests, better known as checkrides.

Pineo referred to Palmer as “one of the original John D. Odegard young guns, flying the jets and living the ‘Aviation Dream.’”

“By the time I met Al, he was director of flight operations and was visibly excited to help us rebuild those international programs, but this time with Japan, Saudi Arabia and China,” Pineo said. “Al’s willingness and enthusiasm to chase new projects and customers was a big part of UND Aerospace’s success.

“He always made himself available to help strategize, host and travel.”

Hired by UND on the same day as Palmer, Don Dubuque – who went on to direct UND’s flight training extension programs until 2018 – maintained a close friendship with Palmer through their nearly 40 years working together. Dubuque regarded Palmer as a great friend with a positive attitude and a willingness to lead by example.

“Among many dedicated people at UND Aerospace, Al was among the most dedicated I worked with,” Dubuque said. “He loved what we were doing, and what our mission was, and that showed in our success. As a manager, he was never afraid to get in there and show how it was done, and he was always kind to people.”

That year, at the rank of brigadier general, Palmer retired from military service, where he served the North Dakota Air National Guard as chief of staff, assistant adjutant general, as well as logistics and support group commander for the 119th Fighter Wing, among other commands served within the unit.

But just as the 119th “Happy Hooligans” transitioned from fighter jets to MQ-9 Predator drones, Palmer answered the call when it came to the future of the John D. Odegard School of Aerospace Sciences. He would end up going directly from his role as director of flight operations to leading what was then known as the UAS Center for Education, Research and Training in October 2010.

Paul Snyder, the current director for UND’s UAS program, spoke of Palmer as a visionary who expertly balanced his dual roles in academic and military life. As UND became the first university in the nation to offer a four-year UAS Operations degree, Palmer leveraged his unique perspective within the aviation industry to UND’s benefit, Snyder said.

Additionally, Palmer was among those from UND who led efforts on behalf of the governor’s Airspace Integration Team that resulted in North Dakota’s selection as one of six national UAS test sites, which today exists as the Northern Plains UAS Test Site with offices located on UND’s campus.

“He always had a vision and worked tirelessly to carry it out,” Snyder said. “He was able to leverage what he already knew about safely and effectively operating in the national airspace system while at the same time keeping UND Aerospace focused on the future needs of the UAS industry, regarding education, research and training.”

Snyder said it was only a month ago that he and Palmer met at the UAS Summit & Expo, and that even after retirement, Palmer continued to engage and strive to make a difference.

“It was clear he cared so much for UND and the UND Aerospace family,” Snyder remarked. “He will be long remembered in the industry as someone who impacted so many lives for the better.

Palmer’s impact also can be felt in the Grand Forks community, with one of his most recent efforts coming to fruition in September of this year. He led the group responsible for the development of Veterans Memorial Park on South 34th Street, north of Columbia Mall, and spoke at the dedication of that monument.

In further support of military members and their families, Palmer co-chaired the military affairs committee of The Chamber of Grand Forks and East Grand Forks, volunteered with the Employer Support of the Guard and Reserve and served on the governor’s Task Force for Veterans Affairs.

He was also active in other civic events and organizations such as the Sertoma Club and Northlands Rescue Mission, among others.

Kent Lovelace, UND’s director of aviation industry relations and longtime colleague of Palmer’s, remarked that Palmer never slowed down when it came to his work and relationships in the Grand Forks community.

“He always kept a full plate of things he was working on, and he was always mission-oriented, even during his retirement,” Lovelace said. “He didn’t look for accolades. He wasn’t doing anything for himself. And he worked hard at everything he was involved in. His mantra was to seek opportunity, improve and grow. We are all saddened by his passing.”

Sen. Kevin Cramer, R-N.D., was among other North Dakota dignitaries, including Gov. Doug Burgum and Sen. John Hoeven, R-N.D., who issued statements in tribute to the late brigadier general.

“Al Palmer dedicated his career to the military, aviation and supporting veterans,” Cramer said. “He was a member of my Military Academy and Veterans Advisory Boards, always providing valued advice. I am forever thankful for his service to our nation in the U.S. Air Force and North Dakota Air National Guard, as well as his support of the UND Aerospace program. His family and friends are in our prayers.”