by Connor Murphy
Published in: Center for Innovation, College of Business & Public Administration 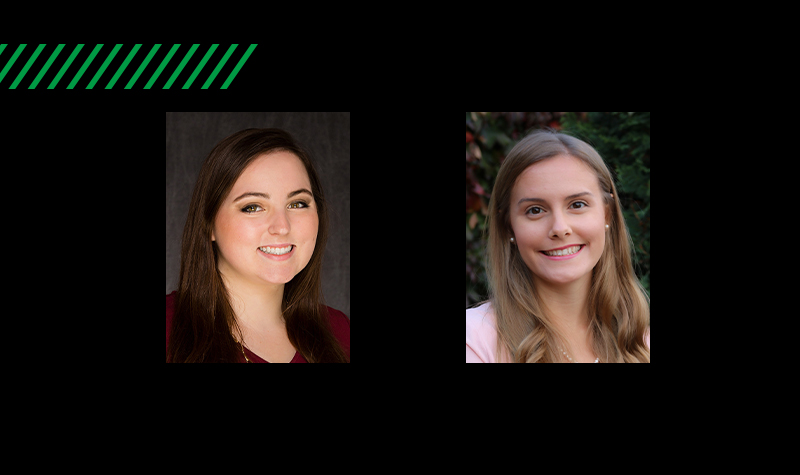 Kayla Klatt had just moved to Grand Forks from Aberdeen, S.D., to pursue a master of business administration degree when COVID-19 brought campus life to a halt.

Without a job for the summer, she did something that many others likely did during the heights of the pandemic: she connected with a hobby through social media.

“I really got into food blogging communities on Instagram,” Klatt said. “I’ve always loved cooking, and eventually, as a joke, I made my own cooking show.

“I’d start with something like, ‘Hi! Welcome to Klatt Cooking, the show where we sometimes sort of always never follow a recipe.’ It was just ridiculous and goofy.”

But today, what started as a pandemic pastime has evolved into a viable business idea, thanks in part to the staff and resources found at UND’s Center for Innovation.

In recent weeks, Klatt was one of two students awarded a Women’s Entrepreneur Prize from the CFI. The prize, a check for $2,500, represents continued support for students’ business ventures from the University’s innovation incubator.

Abby Wilfert, a fellow MBA student and soon-to-be graduate, was the other awardee selected.

The prize is offered to students who have completed a Mueller Internship with the CFI and have demonstrated a strong market fit for their business concept, as well as a commitment to move those concepts forward, according to CFI Director Amy Whitney.

“The Mueller Internship and WEP are opportunities for us to guide and coach students interested in moving their ideas forward, and out into the market,” Whitney said. “Abby and Kayla are goal-oriented, driven, hard-working and they identified a need for what they are working on.

“They came to us with an idea, and we have helped them refine it,” she said.

From rough sketch to picture perfect

It was when Klatt started connecting her social media hijinks with food photography that she started to see a path for herself.

She started taking photography classes online. And as she scrolled through social media pages and websites for local eateries and food-adjacent businesses, she saw the potential to provide more visual means by which to attract customers.

When she met Wilfert, a student who’s been working with the CFI throughout her UND career, Klatt started to see the bigger picture for developing a small business in Grand Forks around food photography.

As she became immersed in workshops and programs hosted by the Nistler College of Business & Public Administration, as well as community organizations such as Greater Grand Forks Young Professionals, Klatt gained perspectives that further shaped her idea for a business.

“Meeting different people in the community, whether people at the CFI or business owners at UND workshops and summits, was a huge source of inspiration,” Klatt said.

She then connected with the Mueller Internship, which is a CFI program open to any UND student or team of students with a business concept. Successful applicants can get up to $2,500 for their time spent working on that concept alongside entrepreneur coaches at the CFI.

The internship program is named for Kurt Mueller, ’62, an investor who has made gifts to UND since 1997 to support hands-on learning of entrepreneurial skills, according to the CFI website.

From Klatt’s perspective, once she expressed a specific interest in developing a business, the floodgates of UND’s and Grand Forks’ small business communities opened. She was overwhelmed, but in a good way, she said with a laugh.

By the end of this semester, she expects to complete her first photography job for a client. And with the latest prize, Klatt will be able to buy camera equipment, props, logos and other items that will help brand and establish her business.

Along with the funding, prize winners are also granted further access to CFI resources, as well as to the 701 Coworking space in downtown Grand Forks, among other perks.

“Even if you just have an inkling of an idea, the Center for Innovation is amazing,” Klatt said. “Because of the Mueller Internship, I essentially had an on-campus job and all of the flexibilities that come with that as I was developing a full-fledged business.”

Next step for the ‘Prodigies’

If Klatt is something of a newcomer to the entrepreneurial scene, Wilfert is a veteran.

The Independence, Minn., native took on the Mueller Internship early in her undergraduate studies, where she drew on her skills as an artist in producing greeting cards and custom art for customers through Abby Grace Designs LLC. While completing that internship program, Wilfert became involved in launching the CFI’s legacy student-run enterprise program, Prodigy Marketing. Wilfert is now mentoring other students in transitioning Prodigy Marketing to Prodigy Consulting as the student enterprise program continues to pivot its operations.

For three years, Wilfert served as director of finance and operations for Prodigy Marketing, a wholly owned subsidiary of the Center for Innovation Foundation that established itself as a one-stop shop for startup and small-business marketing needs. Besides gaining experience, students at Prodigy Marketing are paid based on the revenues from the company’s contracts. In other words, it’s a chance for ambitious students to both make money and jumpstart their careers.

And if you think that sounds like a fabulous college experience, you’re right.

“My colleagues and I started reflecting on all the things we have been doing to build this company,” Wilfert said. “And we saw how much value it brought to us, even beyond what is now on our resumes. We learned a lot about our own skills and our academic and career interests, more broadly.

“We want to make this opportunity available to more UND students.”

And so begins the story of Wilfert’s new business idea: a software dashboard that would automate and streamline the operations of a student-run company.

Together with Carter Razink, one of her former Prodigy Marketing partners, Wilfert co-founded Lumin. The company’s educational technology software will help universities create and grow extracurricular, experiential learning programs – programs like the ones Wilfert has learned from throughout her time at UND.

In other words, Lumin will provide the tools that Prodigy’s founders wish they would have had when creating a student-run enterprise, Wilfert said.

“We want to make it easier for institutions to replicate the same type of experiences that we’ve had at UND, with ventures like Prodigy Marketing,” Wilfert said. “We’re hoping Lumin is a product that can take all of the pieces that you’d need to run an experiential learning program and put it in one place.”

Wilfert maintains that the support and opportunities available to entrepreneurial students at UND is a significant differentiator among other universities. Students are seen as individuals, she said, and professors and staffers help students however possible.

“That level of support definitely inspired my initial interest in entrepreneurship,” Wilfert said. “It comes down to the mentorship and willingness of the CFI staff to provide anything and everything we need to succeed.”

About the Women’s Entrepreneurship Program

The Ethel Stone Women’s Entrepreneur Program – and its associated prize – was named after Ethel Torreson Stone, who ran Torreson Oil in Grand Forks until passing away at age 94. Her endowment is designed to empower college-aged women to become entrepreneurs by giving them resources to help launch and grow their businesses.