After five memorable seasons at UND, Fitch coached in the NBA for 25 years and twice was named NBA Coach of the Year 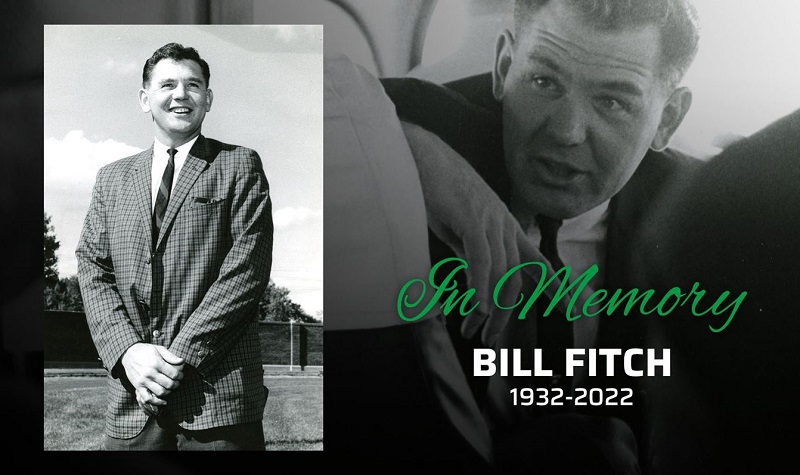 Fitch, a native of Davenport, Iowa, coached in the NBA for 25 seasons, being named Coach of the Year twice (1976 and 1980). In 1996, he was named to the NBA’s Ten Best Coaches of All-Time. He led the Boston Celtics to an NBA Championship in 1981 and still holds the highest winning percentage in Celtic history (.738). He is only the second coach in NBA history to lead a team to three straight 60-win seasons and was a recipient of the NBA’s Chuck Daly Lifetime Achievement Award during the 2012-13 NBA season.

In 1970, Coach Fitch became the Cleveland Cavaliers’ first head coach and went on to become the longest tenured coach in franchise history. He led and inspired a very talented group that went to the playoffs three times (1976-1978), starting with “The Miracle of Richfield” season, when the Cavs won their first division title. Fitch was also named the NBA Coach of the Year that season and was a member of the inaugural class of the Cavaliers Wall of Honor in 2019.

More importantly, Coach Fitch earned the love and respect of his players as he embedded a high standard of accountability and a belief system that he felt was a reflection of the team’s motto as a, “group of daring, fearless men, whose life’s pact was never surrender, no matter what the odds,” something that continues to be greatly valued by those he coached and worked with on and off the court. He was a great friend and trusted mentor and teacher to so many across the entire basketball community, while his impact on the game, and the lives of those he touched, spanned multiple generations.

“He become a life-long friend to many members of the Cavaliers organization. Those relationships were based on great admiration and appreciation for the special person Coach Fitch was and the foundational role he had with the franchise. It is a lasting bond that he will always be part of.” – Cleveland Cavaliers Organization

Bill Fitch quotes, as compiled by various sources on the Internet:

• “I once said coaching a first-year team was a religious experience. You do a lot of praying – but most of the time, the answer is ‘No.'”

• “Sometimes you wake up in the morning and wish your parents had never met.”

• “Going into a game against Lew Alcindor [later Kareem Abdul-Jabbar] is like going into a knife fight and finding there’s no blade in your handle.”

• “Even though he lived on the beach in college, he didn’t have a tan. Now that’s a serious player!”

• “I won’t say Wilt Chamberlain is the strongest man I’ve ever known, but when he wipes the sweat off his brow, people in the balcony get a bath.”