‘Communities and the Individual’ 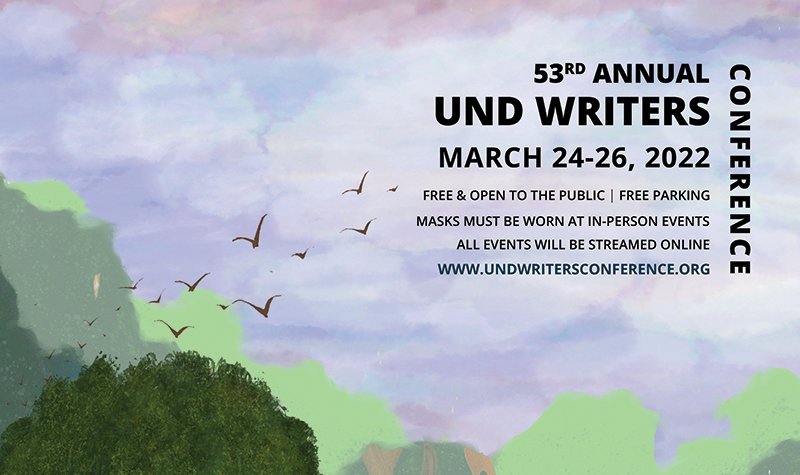 “Communities and the Individual” is the theme of the 53rd annual Writers Conference at the University of North Dakota, which will be held Thursday through Saturday, March 24-26, at the UND Memorial Union and online. All events are free and open to the public.

“The Writers Conference will feature authors and artists whose work considers the role of the individual and relationships to others,” said Crystal Alberts, Writers Conference director and associate professor of English. “Our individual actions have always had direct benefits – or consequences – not just to ourselves, but also to our communities. However, the events of 2020 (and beyond) have revealed the tension between personal liberties and societal responsibilities in a unique combination of ways. These authors will discuss how challenges to identity and survival offer opportunities for change and betterment of self. Hopefully, their experiences will evoke compassion, understanding, and acceptance, as we all strive for growth and a new, possibly better way forward – together.” 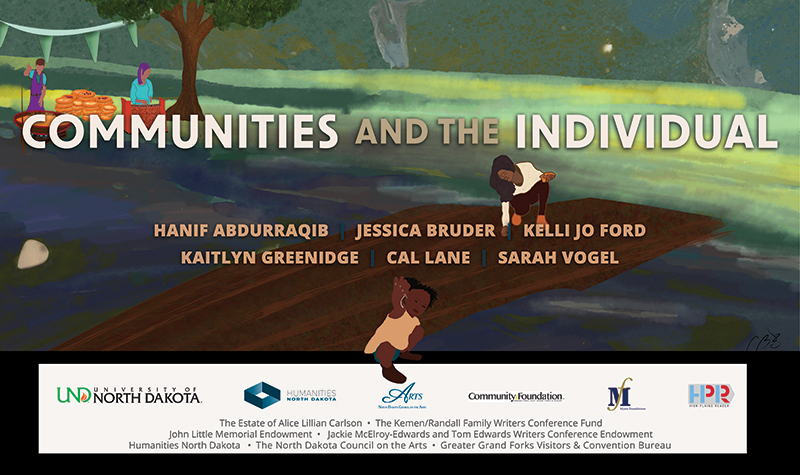 North Dakota native and the state’s first female Agricultural Commissioner (1989-1997), Sarah Vogel is one of the nation’s foremost agricultural lawyers. The American Agricultural Law Association awarded her its Distinguished Service Award, and Willie Nelson honored Sarah at Farm Aid’s 30th Anniversary for her longtime service to family farmers. An in-demand speaker and passionate advocate for farmers and Native Americans, Sarah lives in Bismarck, N.D. She recently published The Farmer’s Lawyer: The North Dakota Nine and the Fight to Save the Family Farm, which focuses on a legal battle to stop the federal government from foreclosing on thousands of family farmers.

Hailed by The New Yorker as “an acute and compassionate observer,” Nomadland author Jessica Bruder reports on social injustice, subcultures, and the dark underbelly of American capitalism. She has spent time working the local sugar beet harvest for American Crystal Sugar Co. Nomadland — the basis of the Oscar-winning film of the same name — documents the lives of itinerant Americans who travel from job to job out of economic necessity. Employers from big-box retailers to commercial farmers have found a new source of cheap labor: transient older Americans. When Social Security comes up short and mortgages sink underwater, these overlooked casualties of the Great Recession take to the road in old RVs, trailers, and camper vans as they clean campground toilets, scan products in warehouses, and harvest beets in a scramble to survive, often long past the age at which they expected to retire.

Hanif Abdurraqib is a poet, essayist, and cultural critic from Columbus, Ohio whose poetry has been published in Muzzle, Vinyl, PEN American, and other journals. His essays and music criticism have been published in The FADER, Pitchfork, The New Yorker, and The New York Times. His first full length poetry collection, The Crown Ain’t Worth Much, was released in June 2016 from Button Poetry. It was named a finalist for the Eric Hoffer Book Prize and nominated for a Hurston-Wright Legacy Award. His first collection of essays, They Can’t Kill Us Until They Kill Us, was released in winter 2017 by Two Dollar Radio and was named a book of the year by Buzzfeed, Esquire, NPR, Oprah Magazine, Paste, CBC, The Los Angeles Review, Pitchfork, and The Chicago Tribune, among others. His newest release, A Little Devil In America, was published in 2021. He was named a MacArthur Fellow last year.

Kelli Jo Ford is a citizen of the Cherokee Nation of Oklahoma who has received numerous awards and fellowships, including the Paris Review’s Plimpton Prize, the Everett Southwest Literary Award, the Katherine Bakeless Nason Award at Bread Loaf, a National Artist Fellowship by the Native Arts & Cultures Foundation, and a Dobie Paisano Fellowship. She is the author of the novel Crooked Hallelujah. Her fiction has appeared in the Paris Review, Virginia Quarterly Review, Missouri Review, and the anthology Forty Stories: New Writing from Harper Perennial, among other places.

Kaitlyn Greenidge is a novelist and a contributing opinion writer for the New York Times. Her most recent novel, the critically acclaimed Libertie, received a starred review from Publisher’s Weekly. She is the author of the debut novel, We Love You, Charlie Freeman, one of the New York Times Critics’ Top 10 Books of 2016. She writes extensively on race and culture. Her essays have appeared in Vogue, Glamour, the Wall Street Journal, Elle.com, Buzzfeed, Transition Magazine, Virginia Quarterly Review, The Believer, American Short Fiction and other places. She has receivedfellowships from the Whiting Foundation, the National Endowment for the Arts, and the Radcliffe Institute for Advanced Study.

Cal Lane is an internationally acclaimed sculptor known for turning ordinary objects into lacy artworks. Her pieces capture a delicacy and intricacy quite apart from her closest contemporaries. Lane’s tapestries, cut into harsh and often preternaturally large steel and iron structures, are sensual, alluring and deeply effeminate. Having spent much of her early life as a hairdresser in her mother’s salon in Vancouver Island, Lane became interested in exploring gender roles and conceptual art. Her work has been exhibited in Australia, Belgium, Canada, England, France and the USA.

All events are free and open to the public. Face coverings are required and social distancing is encouraged. Some of Thursday’s events are both in person and online, and all will be available via live streaming. Friday and Saturday events are online only. Each Zoom event has a separate registration link below.

While the English Department traces its roots to the very founding of the University in 1883, the Writers Conference began in 1970. Founded by the late Professor John Little, the conference had a modest beginning with the Southern Writers Conference of the Arts. Funded by the College of Arts and Sciences as well as by some of the visiting writers themselves, the conference was so successful that it became an annual event almost immediately.

Now in its 53rd year, the Conference enjoys a national reputation among writers as one of the best-run, most interesting events of its kind, especially because of its strong public audiences and free and open format. A large number of volunteers from around the university and the community make it all possible, but it is still organized by the UND English Department

Financial support for the conference has always come from a variety of sources, including student organizations and the president’s office, and, since the mid 1990s, a modest but growing endowment, managed by the UND Alumni Foundation.

Currently, the UND Writers Conference is funded through those endowments, individual gifts, and yearly grant writing, as well as new gifts from alumni and other friends of the Conference like the Alice Lillian Carlson Estate, The Kemen/Randall Family Writers Conference Distribution Fund, the John Little Memorial Endowment, and the Jackie McElroy-Edwards and Tom Edwards Writers Conference Endowment.