‘She just blows my mind’ 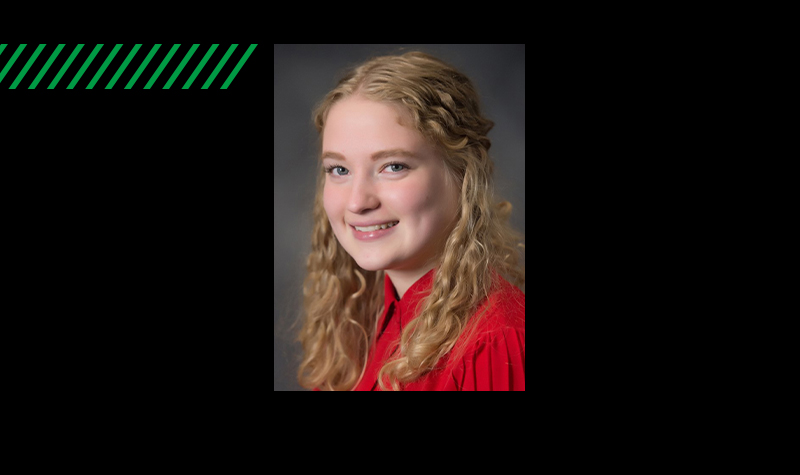 That’s gifted, thoughtful and dedicated in German. And that’s Taylor Roehl of New Leipzig, N.D., in einer Nussschale — in a nutshell.

At least that’s what mentors had to say after the UND Pre-Med senior majoring in German Studies and Forensic Science won her second prestigious international scholarship in less than a month.

Last week, Roehl was selected as a finalist for the Fulbright German English Teaching Assistant Program. Just three weeks earlier, she had earned the 2022-23 Congress-Bundestag Youth Exchange for Young Professionals. Both scholarships are highly competitive with only about 15% to 20% of applicants being selected.

“When I applied, the possibility of having to choose between them was the last of my concerns. I almost can’t believe how lucky I am,” Roehl said. “I’m both thrilled and incredibly grateful. Honestly, there’s no way I could have earned these honors if it weren’t for the help and encouragement I received from a long list of people across the campus community.”

Mentor Thyra Knapp is among those on that list, but the associate professor of German Studies and chair of UND’s Department of Modern & Classical Languages & Literatures says the double win had nothing to do with luck and everything to do with Roehl’s hard work and natural leadership.

“Not only is Taylor an extraordinary student, she’s just an extraordinary individual,” Knapp said. “She’s involved in so many things across campus, and her academic performance in my classes has been stellar. She’s just one of those students who has everything together.”

And by everything, she means everything. Besides juggling a heavy load of coursework, Roehl is enrolled in UND’s Honors Program and serves as vice president of three different campus organizations — the German Cooking Club, Mortar Board and the Undergraduate Medical Association. She also tutors other German students and volunteers at Northlands Rescue Mission, among other things.

In May, she’ll graduate with degrees in both German Studies and Forensic Science, along with minors in Pre-Medicine, Chemistry and Biology. And this summer, she plans to apply to medical school with hopes of eventually specializing in anesthesiology.

And those who know Roehl have no doubts she’ll do that and more.

“Taylor is an exceptional student who is going to truly excel. She absorbs everything like a sponge,” said Associate Professor Amanda Boyd, who also serves as UND’s director of German Studies. “She’s kind, compassionate and very perceptive to other cultures. She’s everything a professor wants to see in a student, and her German is absolutely superb. She just blows my mind.”

“Taylor has a gentle confidence that allows her to embrace the unknown and maintain a steady stride in pursuit of her goals,” Chu said. “I am privileged to have worked with Taylor, and the UND community and North Dakota are so proud of her.”

Moreover, “Taylor is remarkable,” Chu continued. “How does a student from a high school graduating class of 13 develop the vision, audacity and skill set to compete for the most prestigious international exchange scholarships in the land and win them both?”

With her hometown of New Leipzig sitting 40 miles from the nearest interstate, Roehl was a little surprised herself.

“I come from a town of like 200 people, and the only time I’ve ever left the U.S. is to go on a day trip to Winnipeg, so I have to admit the thought of packing for a full year in another country is a little daunting,” she said with a laugh. “But it’s much more exciting than nerve-racking. I’ve been taking German classes since my junior year in high school, so I’m pretty confident and excited about the opportunity to become more fluent in the language.”

And her family is thrilled, too, that she’ll be learning more about the country that’s home to their own town’s namesake, Leipzig, Germany. Roehl said both sides of her family are descendants of the Germans from Russia who settled in Dakota Territory, and later North Dakota, in the late 1800s.

Experiential learning at its best

Because the scholarships would overlap, Roehl was able to accept only one. She said she chose the Congress-Bundestag Youth Exchange because it more closely aligns with her medical interests and goals.

Roehl will spend nearly a year in Germany, fully immersed in the language and culture while she lives with a host family, attends university classes and completes an internship in either biology research or health care.

Though some details need to be worked out, Roehl’s mentors say it’s experiential learning at its best.

“It completely changes your perspective once you have the opportunity to get away from home and put yourself in another culture like that,” Knapp said. “You never see the world the same way again.”

And that new vision is exactly what the future doctor ordered.

“Coming from a small town, I haven’t been exposed to a lot of things culturally,” Roehl said. “I think this is really going to broaden my understanding of other cultures and other people. And as a doctor, that’s really going to help me better understand and relate to the people I’m trying to help.”