Editor’s note: To commemorate May as Asian American and Pacific Islander Heritage Month, UND Today is reprinting a feature by Zeineb Yousif, Digital Initiatives Librarian at UND’s Chester Fritz Library, which recently appeared in the library’s Library Updates blog.  Our thanks to Zeineb Yousif for putting together such a useful and interesting feature!

Margins and Mainstreams : Asians in American history and culture 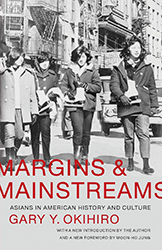 In this classic book on the meaning of multiculturalism in larger American society, Gary Okihiro explores the significance of Asian American experiences from the perspectives of historical consciousness, race, gender, class, and culture.

While exploring anew the meanings of Asian American social history, Okihiro argues that the core values and ideals of the nation emanate today not from the so-called mainstream but from the margins, from among Asian and African Americans, Latinos and American Indians, women, and the gay and lesbian community. Those groups in their struggles for equality, have helped to preserve and advance the founders’ ideals and have made America a more democratic place for all. 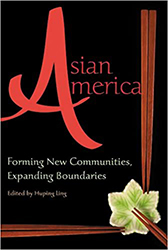 The last half century witnessed a dramatic change in the geographic, ethnographic, and socioeconomic structure of Asian American communities. While traditional enclaves were strengthened by waves of recent immigrants, native-born Asian Americans also created new urban and suburban areas.

Asian America is the first comprehensive look at post-1960s Asian American communities in the United States and Canada. From Chinese Americans in Chicagoland to Vietnamese Americans in Orange County, this multi-disciplinary collection spans a wide comparative and panoramic scope. Contributors from an array of academic fields focus on global views of Asian American communities as well as on territorial and cultural boundaries.

By Guenter B. Risse 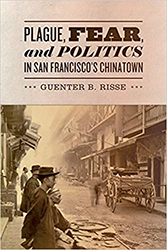 When health officials in San Francisco discovered bubonic plague in their city’s Chinatown in 1900, they responded with intrusive, controlling, and arbitrary measures that touched off a sociocultural conflict still relevant today. Guenter B. Risse’s history of an epidemic is the first to incorporate the voices of those living in Chinatown at the time, including the desperately ill Wong Chut King, believed to be the first person infected.

Lasting until 1904, the plague in San Francisco’s Chinatown reignited racial prejudices, renewed efforts to remove the Chinese from their district, and created new tensions among local, state, and federal public health officials quarreling over the presence of the deadly disease. Risse’s rich, nuanced narrative of the event draws from a variety of sources, including Chinese-language reports and accounts. He addresses the ecology of Chinatown, the approaches taken by Chinese and Western medical practitioners, and the effects of quarantine plans on Chinatown and its residents. Risse explains how plague threatened California’s agricultural economy and San Francisco’s leading commercial role with Asia, discusses why it brought on a wave of fear mongering that drove perceptions and intervention efforts, and describes how Chinese residents organized and successfully opposed government quarantines and evacuation plans in federal court.

By probing public health interventions in the setting of one of the most visible ethnic communities in United States history, Plague, Fear, and Politics in San Francisco’s Chinatown offers insight into the clash of Eastern and Western cultures in a time of medical emergency.

All You Can Ever Know: A Memoir 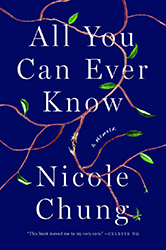 With warmth, candor, and startling insight, Chung tells of her search for the people who gave her up, which coincided with the birth of her own child. All You Can Ever Know is a profound, moving chronicle of surprising connections and the repercussions of unearthing painful family secrets—vital reading for anyone who has ever struggled to figure out where they belong.

Even This Page Is White 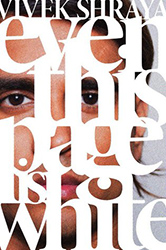 Vivek’s debut collection of poetry is a bold and timely interrogation of skin: its origins, functions, and limitations. Poems that range in style from starkly concrete to limber break down the barriers that prevent understanding of what it means to be racialized. Shraya paints the face of everyday racism with words, rendering it visible, tangible, and undeniable. 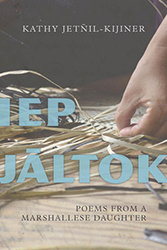 As the seas rise, the fight intensifies to save the Pacific Ocean’s Marshall Islands from being devoured by the waters around them. At the same time, activists are raising their poetic voices against decades of colonialism, environmental destruction, and social injustice.

Marshallese poet and activist Kathy Jetnil-Kijiner’s writing highlights the traumas of colonialism, racism, forced migration, the legacy of American nuclear testing, and the impending threats of climate change. Bearing witness at the front lines of various activist movements inspires her work and has propelled her poetry onto international stages, where she has performed in front of audiences ranging from elementary school students to more than a hundred world leaders at the United Nations Climate Summit.

The poet connects us to Marshallese daily life and tradition, likening her poetry to a basket and its essential materials. Her cultural roots and her family provides the thick fiber, the structure of the basket. Her diasporic upbringing is the material which wraps around the fiber, an essential layer to the structure of her experiences. And her passion for justice and change, the passion which brings her to the front lines of activist movements—is the stitching that binds these two experiences together. 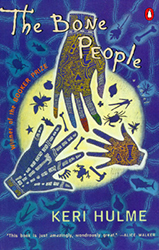 In a tower on the New Zealand sea lives Kerewin Holmes: part Maori, part European, asexual and aromantic, an artist estranged from her art, a woman in exile from her family.

One night her solitude is disrupted by a visitor—a speechless, mercurial boy named Simon, who tries to steal from her and then repays her with his most precious possession.

As Kerewin succumbs to Simon’s feral charm, she also falls under the spell of his Maori foster father Joe, who rescued the boy from a shipwreck and now treats him with an unsettling mixture of tenderness and brutality.

Out of this unorthodox trinity Keri Hulme has created what is at once a mystery, a love story, and an ambitious exploration of the zone where indigenous and European New Zealand meet, clash, and sometimes merge.

The Buddha in the Attic 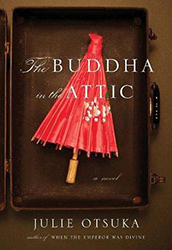 Julie Otsuka’s long-awaited follow-up to When the Emperor Was Divine is a tour de force of economy and precision, a novel that tells the story of a group of young women brought from Japan to San Francisco as “picture brides” nearly a century ago.

In eight incantatory sections, The Buddha in the Attic traces the picture brides’ extraordinary lives, from their arduous journey by boat, where they exchange photographs of their husbands, imagining uncertain futures in an unknown land; to their arrival in San Francisco and their tremulous first nights as new wives; to their backbreaking work picking fruit in the fields and scrubbing the floors of white women; to their struggles to master a new language and a new culture; to their experiences in childbirth, and then as mothers, raising children who will ultimately reject their heritage and their history; to the deracinating arrival of war. 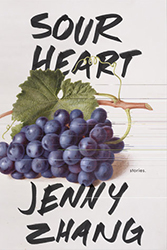 A fresh new voice emerges with the arrival of Sour Heart, establishing Jenny Zhang as a frank and subversive interpreter of the immigrant experience in America. In this debut collection, she conjures the disturbing and often hilarious experience of adolescence through the eyes of Chinese American girls growing up in New York City. Her stories cut across generations and continents, moving from the fraught halls of a public school in Flushing, Queens, to the tumultuous streets of Shanghai, China, during the Cultural Revolution of the 1960s. In the absence of grown-ups, latchkey kids experiment on each other until one day the experiments turn violent; an overbearing mother abandons her artistic aspirations to come to America but relives her glory days through karaoke; and a shy loner struggles to master English so she can speak to God.

Narrated by the daughters of Chinese immigrants who fled imperiled lives as artists back home only to struggle to stay afloat — dumpster diving for food and scamming Atlantic City casino buses to make a buck — these seven stories showcase Zhang’s compassion and moral courage, and a perverse sense of humor reminiscent of Portnoy’s Complaint. A darkly funny and intimate rendering of girlhood, Sour Heart examines what it means to belong to a family, to find your home, leave it, reject it, and return again. 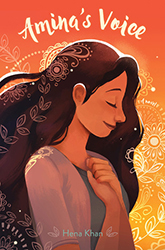 Amina has never been comfortable in the spotlight. She is happy just hanging out with her best friend, Soojin. Except now that she’s in middle school everything feels different. Soojin is suddenly hanging out with Emily, one of the “cool” girls in the class, and even talking about changing her name to something more “American.” Does Amina need to start changing too? Or hiding who she is to fit in? While Amina grapples with these questions, she is devastated when her local mosque is vandalized. 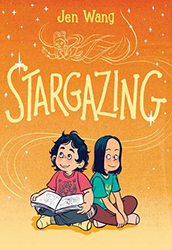 Moon is everything Christine isn’t. She’s confident, impulsive, artistic . . . and though they both grew up in the same Chinese-American suburb, Moon is somehow unlike anyone Christine has ever known.

When Moon’s family moves in next door to Christine’s, Moon goes from unlikely friend to best friend―maybe even the perfect friend. The girls share their favorite music videos, paint their toenails when Christine’s strict parents aren’t around, and make plans to enter the school talent show together. Moon even tells Christine her deepest secret: that she sometimes has visions of celestial beings who speak to her from the stars. Who reassure her that earth isn’t where she really belongs.

But when they’re least expecting it, catastrophe strikes. After relying on Moon for everything, can Christine find it in herself to be the friend Moon needs?

The One Thing You’d Save 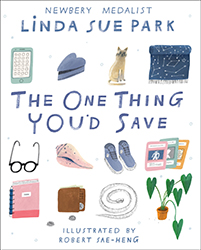 If your house were on fire, what one thing would you save? Newbery Medalist Linda Sue Park explores different answers to this provocative question in linked poems that capture the diverse voices of a middle school class. Illustrated with black-and-white art.

When a teacher asks her class what one thing they would save in an emergency, some students know the answer right away. Others come to their decisions more slowly. And some change their minds when they hear their classmates’ responses. A lively dialog ignites as the students discover unexpected facets of one another—and themselves. With her ear for authentic dialog and knowledge of tweens’ priorities and emotions, Linda Sue Park brings the varied voices of an inclusive classroom to life through carefully honed, engaging, and instantly accessible verse.

Zeineb Yousif is Digital Initiatives Librarian at the Chester Fritz Library at UND.