by Jan Orvik
Published in: School of Graduate Studies 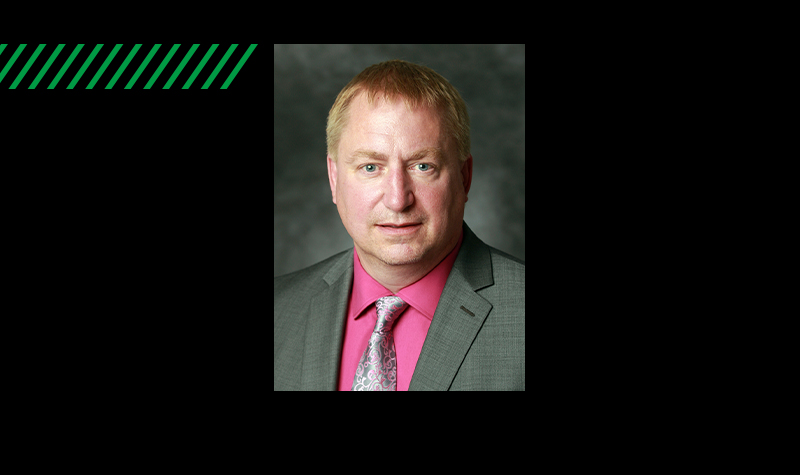 Nelson, the lone finalist for the deanship, took part in on-campus interviews and an open forum in late April. As associate dean, Nelson has served as the top administrator of the school since the previous dean’s retirement in 2019.

“The School of Graduate Studies plays a key role in our academic mission here at the University of North Dakota, helping to advance excellence in graduate programming and providing support and opportunities to help our graduate students be successful both within and beyond the classroom,” said Link. “Dr. Nelson brings years of experience working in support of world-class graduate education at UND. He has a passion for graduate student success and has the vision and leadership needed to ensure that the school continues to have a positive impact across North Dakota, the region and across the nation for years to come.

“We are excited to welcome him into this new role, and we look forward to seeing the School of Graduate Studies grow in prominence and excellence under his leadership.”

Nelson is expected to officially assume his new duties on May 16.

“I am thrilled and honored to be chosen as the next dean of the School of Graduate Studies. I am proud of all we have accomplished at UND in the past few years and look forward to continuing to serve our outstanding graduate programs, faculty and students as we grow and strengthen the future of graduate education at UND,” said Nelson.

Nelson earned his doctorate in English from the University of Illinois Urbana-Champaign in 2002 and served as graduate director of UND’s doctoral and master’s programs in English for six years. Beginning as an SGS Faculty Fellow in 2017, Nelson has developed and implemented: annual 3MT competitions and Graduate Research Achievement Day (GRAD), an extensive graduate student professional development workshop series, entrance/exit surveys and data dashboards, and innovative degree structures leading to 25 Accelerated Bachelor’s/Master’s degrees and six Professional Science Master’s. Under Nelson’s leadership, UND’s SGS has thrived, with record-setting graduate enrollment in each of the past five semesters. He has worked to build a culture of support for graduate students with attention to mental health, diversity and inclusion, and mentoring best practices.

Nelson has raised UND’s national profile through his work with the Council of Graduate Schools and to secure UND’s participation in the first wave of 10 institutions implementing the award-winning Accelerate to Industry (A2i) initiative to prepare graduate students for professional careers. In under two years, he has created strong relationships with city and state government and over 20 local and national employers, placed multiple interns and secured funding partners. Nelson also has played a significant role in advancing research by writing grants, stakeholder reports and white papers, especially in UND’s signature areas of national security and autonomous systems. Nelson is a passionate advocate for graduate students and graduate education who is committed to continuing to grow the SGS as a driver of UND’s excellence and impact as a leading flagship research university.