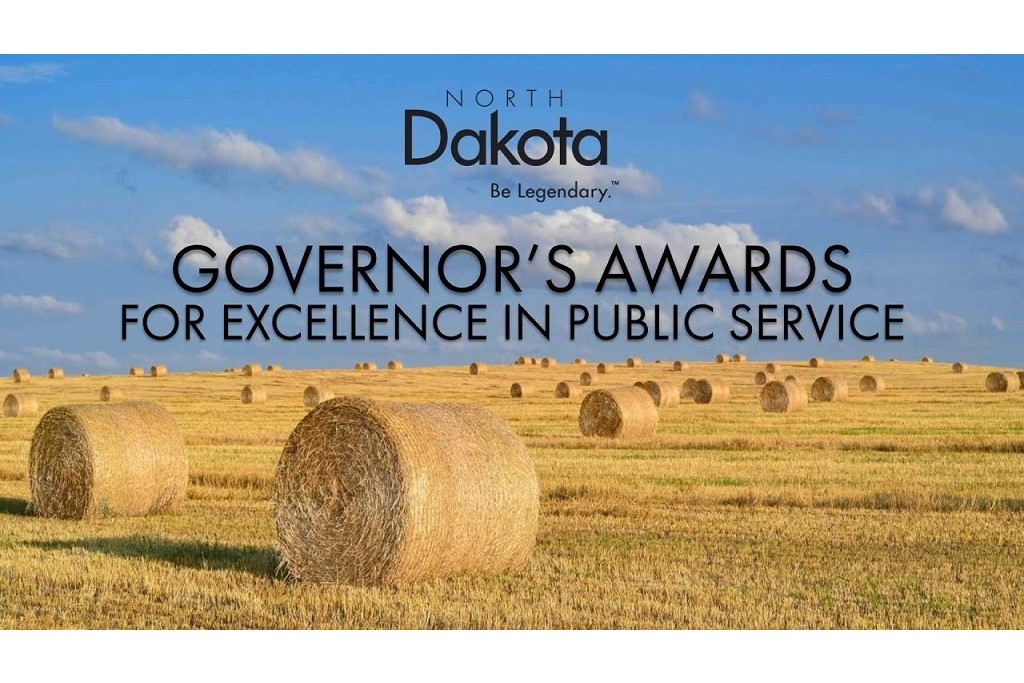 Two people affiliated with UND were among the recipients of the 2022 Governor’s Awards for Excellence in Public Service on Thursday.

Sarah Robinson, clinical associate professor in the Department of Communication Sciences and Disorders, was recognized with the Frontier Award for Excellence in Continuous Learning. In her work, Robinson provides formal learning opportunities for professionals in North Dakota through the creation of evidence-based courses and a recognized certificate in dyslexia.

And Kevin Connors, assistant director for regulatory compliance and energy policy at UND’s Energy and Environmental Research Center, was recognized with the Sodbuster Award for Excellence in Growth Mindset. Connors was honored for his broad leadership in the state’s effort to develop carbon capture, utilization and storage (CCUS) technology and policy.

The Governor’s Awards are meant to recognize team members for making a positive difference in the lives of North Dakota citizens through their dedicated work in state government.

“As a testament to their excellent work, we received more than 900 nominations this year. We are deeply grateful for these individuals, their teams and their tireless dedication to the state of North Dakota and its citizens.”

Burgum and Lt. Gov. Brent Sanford presented the awards during an in-person and virtual ceremony livestreamed from the North Dakota Heritage Center during State Team Member Recognition Month. As part of the ceremony, 2022 Governor’s Awards were presented to a total of eight North Dakota state employees and four state departments or teams.

• Sarah Robinson has presented her research at the national Symposium on Research in Child Language twice and several times at the American Speech-Language-Hearing Association’s annual conventions. She also has been invited to give talks to four neighboring state associations.

As a member of a North Dakota state task force, Robinson became aware of the need to train professionals to work with children who have dyslexia, a reading disorder.

She devised an idea for a certificate in dyslexia (CD). To implement it, she developed three courses from scratch and won the University’s approval of them. She then developed position descriptions for instructors of the courses, interviewed applicants and hired instructors to teach the courses.

The courses are meant to be self-sufficient so that no unit (department, college or UND) is burdened with the expenses of offering them.

The courses will be offered online so that professionals across the state can benefit from acquiring evidence-based knowledge and the latest skills in helping individuals with dyslexia. The courses to earn the CD started this fall, and the class is filled.

• Kevin Connors started his work in North Dakota as a Wellsite Geologist at the Department of Mineral Resources and was eventually moved into a role to create a framework for CO2 storage in North Dakota. He was the person tasked with seeking Class VI primacy – an Environmental Protection Agency grant of authority to administer certain geologic storage wells – for North Dakota.

Connors’ effort succeeded and North Dakota received primacy, becoming the first of only two states to be granted the responsibility of permitting and regulating permanent CO2 storage.

Connors eventually moved on from the DMR to industry and then to the EERC at UND, where he started working with industry on the implementation of CO2 storage projects. Today he leads the Plains CO2 Reduction (PCOR) Partnership Program at the EERC and is helping North Dakota lead the world in the deployment of carbon capture, utilization, and storage.