UND’s new Strategic Plan: The finish line is in view

Nine pages long when printed out and brightened by swatches of UND Green, UND’s new Draft Strategic Plan looks nothing like a diamond.

But the document did emerge, diamond-like, from a process that subjected a raw material – thousands of ideas and suggestions from across the UND community – to exacting pressure under the right conditions.

And the shaping of the plan into a polished gem isn’t yet complete, said leaders of the process at a special Strategic Planning Town Hall meeting on Thursday.

“Our hope is that everyone who’s here right now, as well as a lot more people including everyone who’s watching online, will go to our website and read the plan, then give us feedback – and lots of it,” said Jim Mochoruk, Chester Fritz Distinguished Professor of History and co-chair of the Strategic Planning Committee, at the Town Hall.

“As others have pointed out, we really do pay attention, and that’s shown by the effect those comments have had on previous versions. The plan has changed and will continue to change, thanks to the great comments we’re getting.”

Lynette Krenelka, Committee co-chair and executive director of UND’s Teaching Transformation and Development Academy, agreed. Earlier this year, a first version of the plan – itself the product of seven hard-working workgroups, which had conducted some 50 focus groups and brought together more than 200 faculty, staff, students, alumni and community partners – numbered more than 60 pages.

With the support of the workgroup chairs, the Strategic Planning Committee then embarked on finding the golden threads in that tapestry. “What we discovered was that over 20 key priorities identified by our workgroups fit quite organically into the shared values and five pillars of the revised plan,” Krenelka said.

“This was a pleasant surprise – but we really shouldn’t have been too surprised, because the workgroups and Strategic Planning Committee had worked in such close collaboration that it’s natural there would be this sort of synergy happening. …

“We hope that what has been brought together is a manageable, doable and still aspirational draft of the Strategic Plan – and as Jim mentioned, it is still a draft. It’s a plan that will allow us to honor the work done under the previous One UND strategic plan, as we move to the new plan of UND Leads.” 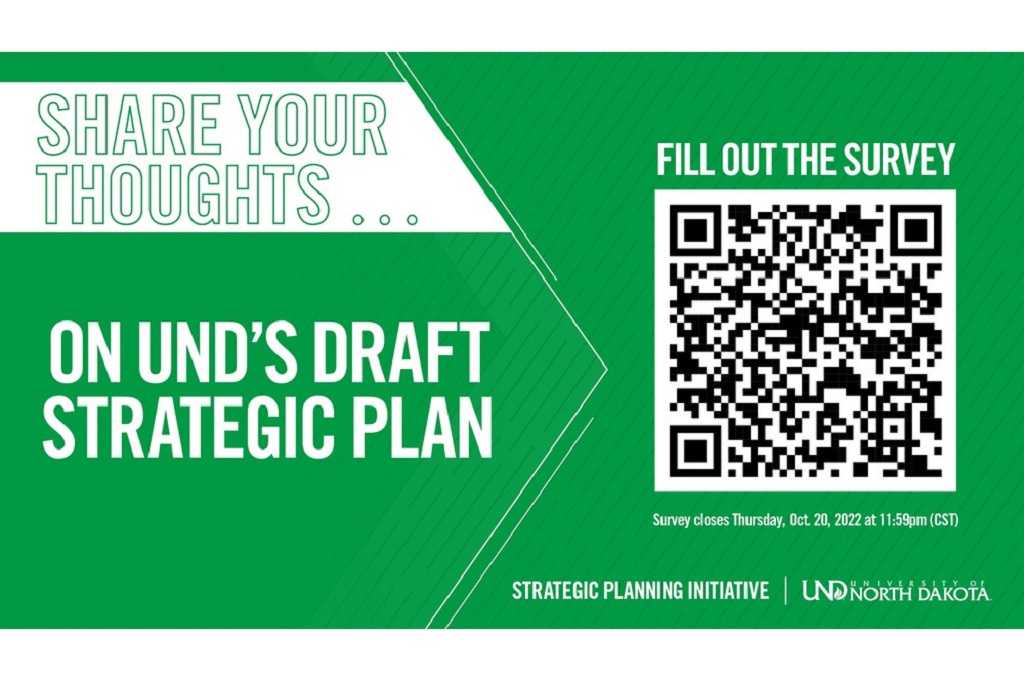 Read the plan, take the survey

UND Leads, the new Draft Strategic Plan, now is available for review on the Strategic Planning Committee’s website. Also available there is a Qualtrics survey, where members of the UND community are invited to give feedback after they’ve read the nine-page plan.

At the Town Hall, strategic-planning leaders introduced and described the plan’s Five Pillars, then gave real-world examples of the Pillars’ principles in action. For example, Anna Kinney, coordinator of the UND Writing Center, talked about the Sense of Wonder – the declaration that “UND leads by providing dynamic educational experiences essential for living intellectually curious, personally fulfilling, and socially responsible lives.”

Among those “dynamic educational experiences” has been that of Muriel Rott, a third-year student at the UND School of Law. Rott “has worked with the Grand Forks County State’s Attorney’s office since January of this year,” Kinney said.

“While working there, she’s participated in bench trials, jury trials, prepared charging documents and written motion briefs, and was even involved in a Supreme Court brief.

“This summer, Muriel had the unique experience of arguing that case in front of the North Dakota Supreme Court – which, by the way, she won,” Kinney continued.

Patrick Henry, assistant professor of English, talked about Love of Discovery, the plan’s second pillar: “UND leads by encouraging the love of discovery in all of our scholarship,” the plan declares.

Take just two examples: the University’s creation of the world’s first Department of Indigenous Health, and the University’s ongoing, multi-million-dollar research partnerships with the U.S. Space Force and the Space Development Agency. Said Henry, these and dozens of other projects embody the key elements of a Love of Discovery: First, that UND will foster a culture of creativity, research and innovation; second, that the University will inspire collaboration and cross-disciplinary work; and third, that UND will unite its world-class experts with partners in the community, state, region and world.

“There’s one other thing I’d like to say,” Henry added.

“I believe a key part of our love of discovery here at UND is that we are fundamentally serving something greater than ourselves and our own programs. We love the work that we do as researchers, as creators and as scholars because it gives back to the community and builds ties. It is part of our ethic of service.”

Several other stories about the first two pillars were shared, as were stories illustrating the remaining three pillars when they were described by other speakers. Those pillars are:  Commitment to Serve – “UND leads by fostering collaborations that serve the evolving needs of our people, the state of North Dakota, and our global community,” which was presented Angie Carpenter, director of Special Student Populations; Inclusive Excellence and Equity: “UND leads by including all voices in cultivating a culture that respects all people;” presented by Casey Osaki, department chair and professor of Education, Health and Behavior Studies; and  A Culture of Belonging: “UND leads by ensuring our people are at the center of all we do,” presented by Aaron Flynn, assistant director of Memorial Union Facilities & Operations.

Changes from the One UND plan

One point worth emphasizing is the difference between the new UND Leads plan and the University’s previous strategic plan, One UND.

The previous plan served UND very well, the speakers agreed. “But it needs to be said that this new plan consciously strikes a very different tone than did One UND,” Krenelka said.

“To begin with, the new plan is driven by the voices and concerns of the broad UND community. In this lengthy process, all voices were heard; and even if all the suggestions and concerns could not be incorporated into the plan, they remain part of the record and will always be considered and reconsidered as we move forward.”

Furthermore, “UND Leads is also far less prescriptive than its predecessor and has left far more room in it for individual units and individuals to find ways to insert themselves into this plan, and even to help alter it as we move forward.

“Indeed, the new plan is calling for nothing less than a change of our campus climate and culture – a climate-and-culture that consciously seeks to have all members of the UND community see themselves as crucial components of the future success of this institution.”

Last but not least, “this plan introduces the concept that we are all leaders in one way or another, whether it be behind the scenes, taking the lead on a project or program, supporting others or being in a leadership position,” Krenelka said.

“We heard feedback that not everyone sees themselves as a leader. But we truly believe that we are all leaders in one way or another.”

Krenelka came back to the Town Hall meeting’s core theme: the fact that the Strategic Planning Committee is inviting all members of the UND community to read the plan and offer comments and suggestions.

“We want to emphasize that this is still a draft,” she said. “We are seeking your input and your feedback on how to make the final plan even stronger.

“The final plan will include UND stories, which will change over time to highlight the pillars and themes within. Metrics will also be needed to ensure we know we are successful in our work. And we are working with a team in finance and operations on how strategic initiatives that link back to the plan can be proposed and considered as part of the annual budgeting process. So we’ve started those conversations already.”

The net result should be a plan of which all of UND can be proud, Krenelka said.

The Strategic Planning Committee intends to spend the next few weeks incorporating the feedback it receives into the draft plan. The final draft will be submitted to President Armacost in December. 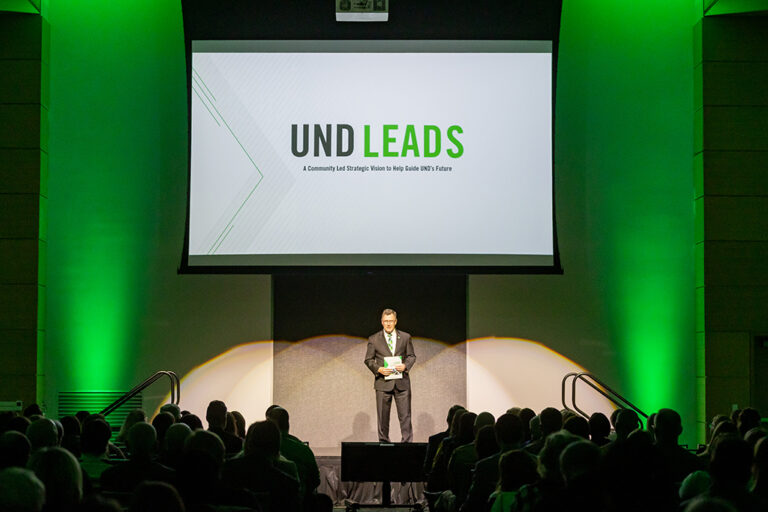 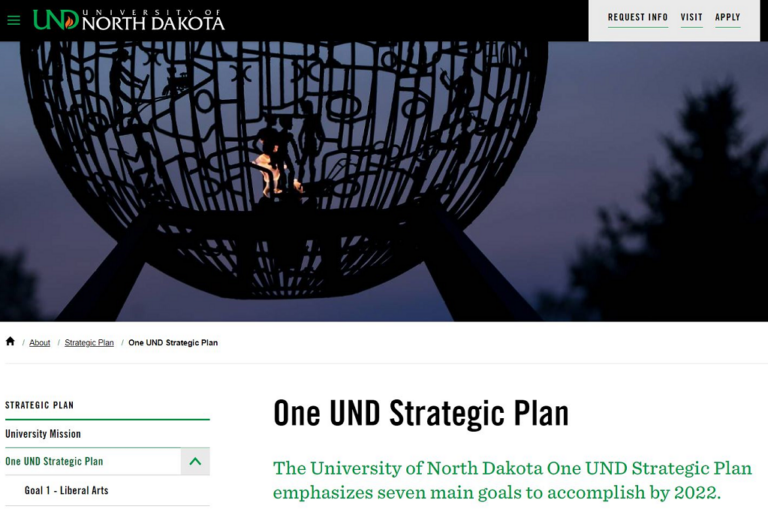 Preparing UND for the next level