National Hispanic Heritage Month runs from September 15th to October 15th. It is a time to celebrate the histories, cultures, and contributions of American citizens who have ancestors and family members from Spain, Mexico, the Caribbean and Central and South America.

Drown is the semi-autobiographical, debut short story collection from Dominican-American author Junot Díaz that address the trials of Dominican immigrants as they attempt to find some semblance of the American Dream after immigrating to America.

This book is perfect for those who look for a little spookiness during this time of the year. A gothic mystery takes place in the Mexican countryside in the 1950s, where the reader will be on the edge of their seat to find the fate of Noemí Taboada in pursuit to help save her cousin.

The Alchemist by Paulo Coelho
An Andalusian shepherd boy named Santiago travels from his Spanish homeland to the Egyptian desert in search of treasure buried in the Pyramids. Along the way he meets a gypsy woman, a man who calls himself king, and an alchemist, all of whom point Santiago in the direction of his quest. No one knows what the treasure is, or if Santiago will be able to surmount the obstacles along the way. But what starts out as a journey to find worldly goods turns into a meditation on the treasures found within.

One Hundred Years of Solitude by Gabriel García Márquez

One Hundred Years of Solitude is a landmark 1967 novel by Colombian author Gabriel García Márquez that tells the multi-generational story of the Buendía family, whose patriarch, José Arcadio Buendía, founded the town of Macondo. The novel is often cited as one of the supreme achievements in literature.

My Time Among the Whites: notes from an unfinished education by Jennine Capó Crucet

What does it mean to find yourself a stranger in the country where you were born? Raised in Miami, the daughter of Cuban refugees whose aspirations for their child began with a plan to name her after a Miss America pageant winner, Jennine Capó Crucet grew up in a nation designed to exclude. In dispatches that range from a rodeo town in Nebraska to the Ivy League and Disney World, the critically acclaimed Latinx writer and first-generation American explores the political and personal contours of her Americanness, as she experiences it, and as it is constructed by others. Wry, candid, and fearless, this book captures the sometimes hopeful yet deeply flawed ways in which many Americans have learned to adapt, exist, and–in the face of all signals showing otherwise–even thrive in a country that never imagined them here.

Open Veins of Latin America: five centuries of the pillage of a continent by Eduardo Galeano

Open Veins of Latin America: Five Centuries of the Pillage of a Continent is a book written by Uruguayan journalist, writer, and poet Eduardo Galeano, published in 1971, that consists of an analysis of the impact that European settlement, imperialism, and slavery have had in Latin America.

My Invented Country: a nostalgic journey through Chile by Isabel Allende

In My Invented Country Isabel Allende evokes the magnificent landscapes of her country, a charming, idiosyncratic Chilean people with a violent history and indomitable spirit, and the politics, religion, myth and magic of her homeland that she carries with her even today. The book circles around two life-changing moments. The assassination of her uncle, Salvador Allende Gossens, on September 11, 1973, sent her into exile and transformed her into a literary writer. And the terrorist attacks of September 11, 2001, on her adopted homeland, the United States.

Published here in its entirety, Frida Kahlo’s amazing illustrated journal documents the last ten years of her turbulent life. Covering the years 1944-45, the 170-page journal contains Frida’s thoughts, poems, and dreams, and reflects her stormy relationship with her husband, Diego Rivera, Mexico’s famous artist. The seventy watercolor illustrations in the journal – some lively sketches, several elegant self-portraits, others complete paintings – offer insights into her creative process, and show her frequently using the journal to work out pictorial ideas for her canvases. The text entries, written in Frida’s round, full script in brightly colored inks, add an almost decorative quality, making the journal as captivating to look at as it is to read. Frida’s childhood, her political sensibilities, and her obsession with Diego are all illuminated in witty phrases and haunting images.

I am Not Your Perfect Mexican Daughter by Erika L. Sánchez

Living in the shadows of your older siblings is something that anyone who has them can relate to, and throwing in the cultures and customs of your family can be a whole other ball game. When the sister who delighted their parents by her faithful embrace of Mexican culture dies in a tragic accident, Julia, who longs to go to college and move into a home of her own, discovers from mutual friends that her sister may not have been as perfect as believed.

The Poet X: a novel by Elizabeth Acevedo

Xiomara Batista feels unheard and unable to hide in her Harlem neighborhood. Ever since her body grew into curves, she has learned to let her fists and her fierceness do the talking. But Xiomara has plenty she wants to say, and she pours her frustration onto the pages of a leather notebook, reciting the words to herself like prayers – especially after she catches feelings for a boy in her bio class. With Mami’s determination to force her daughter to obey the laws of the church, Xiomara understands that her thoughts are best kept to herself. When she is invited to join her school’s slam poetry club, she knows that she could never get around Mami’s rules to attend, much less speak her words out loud. But still, she can’t stop thinking about performing her poems. Because in spite of a world that may not want to hear her, Xiomara refuses to be silent.

Doña Flor: a tall tale about a giant woman with a big heart by Pat Mora

Doña Flor is a giant woman who lives in a puebla with lots of families. She loves her neighbors–she lets the children use her flowers for trumpets, and the families use her leftover tortillas for rafts. So when a huge puma is terrifying the village, of course Flor is the one to investigate. 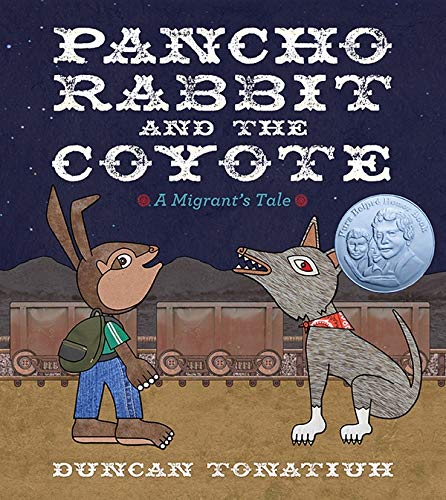 Pancho Rabbit and the Coyote: a migrant’s tale by Duncan Tonatiuh

In this allegorical picture book, a young rabbit named Pancho eagerly awaits his papa’s return. Papa Rabbit traveled north two years ago to find work in the great carrot and lettuce fields to earn money for his family. When Papa does not return, Pancho sets out to find him. He packs Papa’s favorite meal—mole, rice and beans, a heap of warm tortillas, and a jug of aguamiel—and heads north. He meets a coyote, who offers to help Pancho in exchange for some of Papa’s food. They travel together until the food is gone and the coyote decides he is still hungry . . . for Pancho!