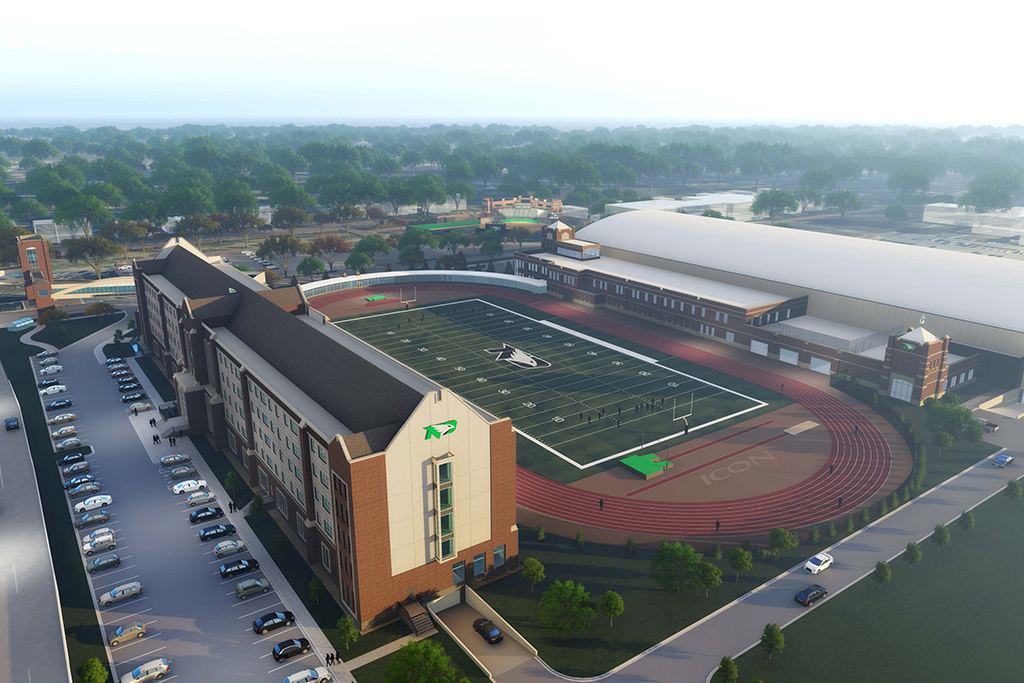 Long-standing supporters of the University of North Dakota and members of the Greater Grand Forks community are invited to a groundbreaking ceremony Thursday, Aug. 25, to celebrate the start of construction on Memorial Village, a five-story structure that will house coaching staff, athletic administration, student-athlete academic services, and feature market-rate apartments on the upper floors.

The building, at the site of the former Memorial Stadium grandstand, is a public/private partnership between UND and a private development company, Memorial Village LLC.

“The Memorial Village, to use a sports term, is sure to be a game changer for UND Athletics and the student-athletes who study and compete under the Fighting Hawks flag,” said UND President Andy Armacost. “We see the groundbreaking of this innovative public/private partnership as an exciting beginning, or first step in a series of UND Athletics transformations to come. And we’re doing it all under the Memorial Village name, retaining many historic elements of the venerable old Memorial Stadium, which for 94 years, stood at that location as a solemn tribute to UND’s fallen World War I heroes.”

“We are excited to share this project with UND and the Greater Grand Forks community,” said Steve Burian, Memorial Village LLC partner. “We have already been moving dirt on the site, but this groundbreaking ceremony will be a great opportunity to share our vision for the project.”

Memorial Stadium was razed last year due to structural concerns. The stadium played host to UND football games from 1927 to 1999, as well as many collegiate and high school track and field meets and other activities like the Prairie Rose Games and Special Olympics events.

The Memorial Village will occupy the west side of the stadium and will be connected to the Frederick “Fritz” D. Pollard Jr. Athletic Center by an enclosed glass walkway, which will incorporate the stadium’s iconic brick wall that arcs around the north side of the grounds.

The UND Alumni Association & Foundation continues to fundraise for Phase 2 of the Pollard Athletic Center. That project will include locker rooms, weight room facilities and an area for the UND Sports Medicine Department.

“With the Memorial Village project and the expectation of full donor funding for Pollard Phase 2, this is an incredibly exciting time for UND Athletics student-athletes, coaches and staff,” said Bill Chaves, UND Athletics Director. “The historic legacy of this site will carry on into the future as the epicenter of student-athlete training and academic excellence.”

Who: Remarks will be offered by:

A novel of magic, China and the library at UND

UND Office of Teacher Recruitment and Retention open for business