‘One Hundred Voices’ from Pennsylvania’s past

As our nation commemorates the anniversaries of the ratification of the 15th Amendment (1870), which enfranchised African-American men, and the later 19th Amendment (1920), which extended the vote to women, a coalition of citizens, civic organizations and educational institutions in Harrisburg, Pennsylvania’s capital city, have partnered to celebrate these significant milestones.

And The Digital Press at UND is playing a key role in the celebrations. 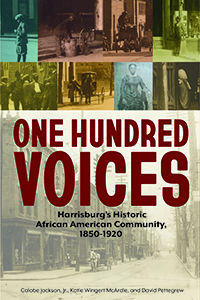 The book is available for free download as an e-book and for $10 as a paperback. It tells the story of 100 individuals whose names who will appear on the bronze pedestal of the Commonwealth Monument.

Called “A Gathering at the Crossroads,” this monument is dedicated to Harrisburg’s significant African American community and its historic struggle for the vote.

The names inscribed on the bronze pedestal represent a cross section of the activists who lived and worked in Harrisburg’s African American community and include freedom seekers, abolitionists, suffragists, policemen, masons, doctors, lawyers, poets, teachers, preachers, janitors, and business leaders. All shared a committed advocacy for freedom, equality, and justice.

The Commonwealth Monument will be unveiled on Wednesday (Aug. 26) in an event attended by the governor of Pennsylvania, the mayor of Harrisburg, and other dignitaries.

Lenwood Slone, executive director of the Commonwealth Monument Project, described the project as “more than a monument but a movement of solidarity, scholarship, and fellowship. It becomes the first monument commemorating the 15th and 19th amendment and heralding the value of the vote to be placed on any Capitol complex in the nation.”

David Pettegrew, a historian at Messiah College in Mechanicsburg, Pa., and with the Digital Harrisburg project, describes One Hundred Voices as “marking the culmination of a fruitful collaboration between community historians, educators, and students who have engaged in research of a subject of greatest relevance.

“It presents a window to Harrisburg’s historic African American community and an invitation to make your own discoveries about the resilient catalysts inspired through faith and conviction to fight for freedom and political equality, social and economic opportunity, and moral improvement.”

Katie Wingert McArdle, who co-edited the book with Pettegrew and Calobe Jackson Jr., observed, “When we researchers paused to listen to these ‘one hundred voices,’ we heard echoes more powerful and beautiful than we could have possibly fathomed.”

Jackson Jr., a historian of Harrisburg African American studies who – besides co-editing the book – helped develop the initial list of names, noted: “Our One Hundred Voices book is a new start to sharing the history of Harrisburg.”

More information on the Commonwealth Monument Project is available at the project’s website.