‘Roots of the Earth’ 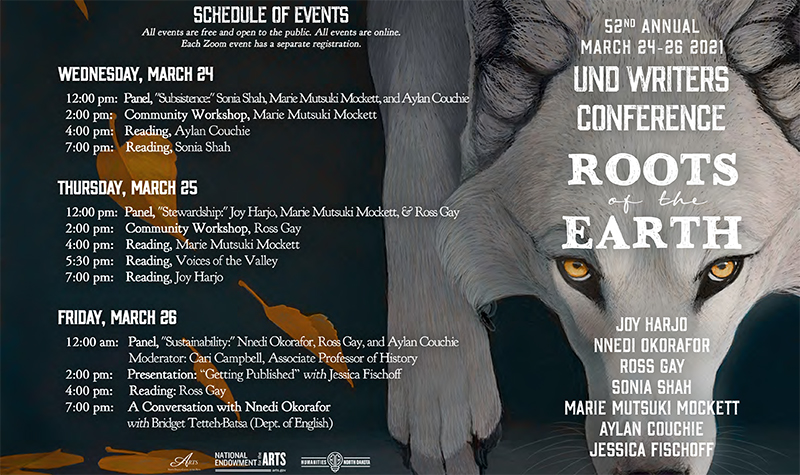 A U.S. Poet Laureate and a Marvel Comics writer who has penned Black Panther stories are among the featured authors at the 52nd annual University of North Dakota Writers Conference. Known for bringing premier authors to campus, the event will be held March 24-26 online.

Founded in 1970 and held every year since, the UND Writers Conference is a three-day event featuring six to eight authors annually. The UND Writers Conference is committed to community outreach, engagement, and finding ways to increase audience access to literature. It has featured some of the most well-known authors of the 20th and 21st centuries.

“Our annual spring tradition is usually a time when we gather on campus with old friends to mingle, discuss literature, reminisce about past Conference events (official and unofficial), and make new friends and memories,” said Crystal Alberts, Writers Conference director and associate professor of English. “Because, as I’ve learned since 2009, every UND Writers Conference alum attendee has at least one story, you just have to listen. Unfortunately, we aren’t able to get together again this year, but we are able to the take the mission of the UND Writers Conference—free and open access to the literary arts—to a level never imagined in 1970, as we will be a virtual event available to anyone with an internet connection. We have people registered from across the U.S, and I’m excited for our Conference to reach new audiences, as well as old, including alumni who haven’t been able to join us in decades.”

The theme of this year’s conference is “Roots of the Earth.” The Conference will feature authors and artists whose work considers the role of place, the environment, and sustainability in light of our global situation, including Joy Harjo, Nnedi Okorafor, Ross Gay, Marie Mutsuki Mockett, Sonia Shah, Aylan Couchie and Jessica Fischoff. The hope is that through the arts, attendees might have a conversation about the impact we, as individuals and as a community, have on the planet.

The schedule follows. Register at the UND Writers Conference site to receive the Zoom links.

Joy Harjo: In 2019, Joy Harjo was appointed the 23rd United States Poet Laureate, the first Native American to hold the position. Born in Tulsa, Oklahoma, Harjo is an internationally known award-winning poet, writer, performer, and saxophone player of the Mvskoke/Creek Nation. Grammy award winning saxophonist Paul Winter says, “Joy Harjo is a poet of music just as she is a poet of words.” She is the author of nine books of poetry and a memoir. Harjo is the recipient of a Guggenheim Fellowship, the New Mexico Governor’s Award for Excellence in the Arts, the Rasmuson United States Artist Fellowship. In 2014 she was inducted into the Oklahoma Writers Hall of Fame.

Nnedi Okorafor: Nnedi Okorafor is a Nigerian-American author of Africanfuturism and Africanjujuism for children and adults. Her works include Who Fears Death (in development at HBO into a TV series), the Binti novella trilogy, The Book of Phoenix, the Akata books and Lagoon. She is the winner of Hugo, Nebula, World Fantasy, Locus and Lodestar Awards and her debut novel Zahrah the Windseeker won the prestigious Wole Soyinka Prize for Literature. Her next novel, IKENGA, will be in stores August 2020. Nnedi has also written comics for Marvel, including Black Panther: Long Live the King and Wakanda Forever.

Ross Gay: Ross Gay is the author of four books of poetry: Against Which; Bringing the Shovel Down; Be Holding; and Catalog of Unabashed Gratitude, winner of the 2015 National Book Critics Circle Award and the 2016 Kingsley Tufts Poetry Award. His new poem, Be Holding, will be released from the University of Pittsburgh Press in September of 2020. His collection of essays, The Book of Delights, was released by Algonquin Books in 2019. He has received fellowships from Cave Canem, the Bread Loaf Writer’s Conference, and the Guggenheim Foundation. Ross teaches at Indiana University.

Marie Mutsuki Mockett: Mockett’s latest book, American Harvest, is set in seven agricultural and heartland states, and will be published by Graywolf Press on April 7, 2020; it was a finalist for the Lukas Prize for Nonfiction. Her memoir, Where the Dead Pause and the Japanese Say Goodbye, explores how the Japanese cope with grief and tragedy and is set against the backdrop of the 2011 earthquake, tsunami and nuclear disaster in Tōhoku, Japan and her family’s 350 year old Buddhist temple. The memoir was a New York Times Editors Choice, a Barnes and Noble Discover Pick, an Indie Next Pick, a Finalist for the 2016 Pen Open Book Award, a San Francisco Chronicle Best Book of 2015 and a Finalist for the Indies Choice Best Book for Adult Nonfiction for 2016.

Sonia Shah: Sonia Shah is an investigative journalist and author of critically-acclaimed books on science, human rights, and international politics. Her latest book, The Next Great Migration: The Beauty and Terror of Life on the Move has been described as “illuminating” and “masterful.” Sonia’s fourth book, Pandemic: Tracking Contagions from Cholera to Ebola and Beyond was a finalist for the 2017 Los Angeles Times Book Prize, the New York Public Library’s Helen Bernstein Book Award for Excellence in Journalism, and the National Association of Science Writers’ Science in Society Award. Her TED talk, “Three Reasons We Still Haven’t Gotten Rid of Malaria,” has been viewed more than one million people around the world. Sonia holds a BA in journalism, philosophy, and neuroscience.

Aylan Couchie: Aylan Couchie is a Nishnaabekwe interdisciplinary artist and writer hailing from Nipissing First Nation. She is a NSCAD University alumna and received her MFA in Interdisciplinary Art, Media and Design at OCAD University in where she focused her thesis on reconciliation and its relationship to monument and public art. Her written, gallery and public works explore the intersections of colonial/First Nations histories of place, culture and Indigenous erasure as well as issues of (mis)representation and cultural appropriation. She’s been the recipient of several awards including an “Outstanding Student Achievement in Contemporary Sculpture” award through the International Sculpture Centre and a Premier’s Award through Ontario Colleges. She serves as the Chair of Native Women in the Arts and currently lives and works from her home community of Nipissing First Nation in Northern Ontario and is a PhD Candidate in the Cultural Studies program at Queen’s University.

Jessica Fischoff: Jessica Fischoff is editor and owner of [PANK], Editor and owner of American Poetry Journal, author the little book of poems, The Desperate Measure of Undoing (Across the Margin, 2019) and Editor of the upcoming Pittsburgh Anthology (Dostoyevsky Wannabe). Her thoughts on editing appear in Best American Poetry and The Kenyon Review. Her writing appears in Esquire, Diode Poetry Journal, The Southampton Review, The Common, Creative Nonfiction, and Adroit Journal.

About the UND Writers Conference

While the UND English Department traces its roots to the very founding of the University in 1883, the Writers Conference only began in 1970. Founded by the late Professor John Little, the conference had a modest beginning with the Southern Writers Conference of the Arts. Funded by the College of Arts and Sciences as well as by some of the visiting writers themselves, the conference was so successful that it became an annual event almost immediately.

Though the conference quickly had University-wide appeal and, since the mid-1970s, significant attendance from the community and region, it has always been organized by faculty, staff, and students of the English Department. In more recent years it has become known nationwide as one of the most distinctive conferences of its kind, in part because it remains free and open to the public.

Currently, the UND Writers Conference is funded through a modest endowment managed by the UND Alumni Foundation, individual gifts, and yearly grant writing, as well as new gifts from alumni and other friends of the Conference like the Alice Lillian Carlson Estate, The Kemen/Randall Family Writers Conference Distribution Fund, the John Little Memorial Endowment, and the Jackie McElroy-Edwards and Tom Edwards Writers Conference Endowment. It is also sponsored in part by a grant from the National Endowment for the Arts.