The rattling started under cover of darkness on the streets of New York City. But unlike the metal pea that shakes up the contents of a spray paint can, this rattle would awaken the art world with a noise louder and more powerful than any graffiti message.

At first, this new brand of street art was purposely simple. In black and white lettering and plastered on walls and windows everywhere, one poster read:

“What do these artists have in common?”

Then, in three neat columns, the names of 42 popular artists before the answer:

“They allow their work to be shown in galleries that show no more than 10% women or none at all.”

The unified message — and public shaming — was an act of rebellion. It was a call to action to fight sexism in the institutional art world. And it was signed: Guerrilla Girls, Conscience of the Art World.

Now, nearly 40 years after the group of activist artists first called out some of America’s biggest galleries and museums for those institutions’ exclusionary practices that hurt women and artists of color, they’re rattling minds again right here on the UND campus. And this time, it’s thanks to students in an advanced art history class.

The “Guerrilla Girls: The Art of Behaving Badly” exhibit is showing through July 15 in The Memorial Union Gallery. It’s free and open to the public.

“I always like to address professional practice in my 400-level courses,” Derenne explained. “Sometimes, it’s grant writing. Sometimes, it’s developing an artist’s statement. I like to give my students some sort of real-world experience. And this time it was curating an exhibition from start to finish.”

After talking about feminist art and, more specifically, the Guerrilla Girls, the art and Women & Gender Studies students in Derenne’s 410 Advanced History of Art course developed a theme and chose from a wide selection of Guerrilla Girls poster and billboard art, books and videos to create their own chronological tour of the movement, which expanded to include contemporary politics and pop culture.

The Guerrilla Girls — who wear gorilla masks at public events to maintain their anonymity and keep the focus on the issues rather than themselves — describe their mission this way:

“We use facts, humor and outrageous visuals to expose bias and corruption in politics, art, film and pop culture. We have done hundreds of projects — posters, actions, books, videos, stickers all over the world, as well as interventions and exhibitions inside museums blasting them on their own walls for their discriminatory practices.”

The group’s first color poster probably remains its best-known. Produced in 1989, it included their first “weenie count” taken at the Metropolitan Museum of Art in New York City. In response to the overwhelming number of female nudes shown in the museum, the poster asks: “Do women have to be naked to get into the Met. Museum?”

It goes on to say: “Less than 4% of the artists in the Modern Art sections are women, but 76% of the nudes are female.”

The text is tucked next to an image of the Jean Auguste Dominique Ingres painting of one of the most famous female nudes in Western art history — this time, however, a gorilla head is placed over the woman’s face.

That’s Guerrilla Girls humor, and viewers have come to expect it in the artists’ messaging. Though the topic is always serious, their artwork has evolved from its original straightforward facts and numbers to a more witty and snarky style that both entertains and makes its audience stop and think.

“What was shocking to me at the opening last month was the silence,” Derenne said. “Ordinarily, an art opening is kind of like a party. You expect people to be mingling and talking. The room was full of people, but no one was talking. It was silent. People just seemed to be taking it all in.”

Senior Brie Schleppi, who’s studying Fine Arts with a focus on graphic design, observed much the same. She said she could see the emotion wash over people’s faces as they watched one of the videos in the exhibit.

“It gets you all fired up. You’re just so excited about it,” Schleppi said. “It shows you how to disrupt the norm and point out some glaringly obvious discrimination. You feel like that gorilla in a cage, and you just want to break out of there and really shake things up.”

A world apart, a world of difference

For graduate art student Mahsa Attaran, the whole experience was liberating. It was the Iranian student’s first semester at UND and her first trip to America.

“It’s so different in my country. I tell my classmates and my friends here that you’re so lucky that your demonstrations are at such a high level, that you are talking about women’s rights and equality in art and salary,” Attaran said.

It’s an argument of privilege, she explained further.

“In Iran and many Middle Eastern countries, we cannot have such things. There, women are deprived of their basic human rights. For example, if you walk in the street without your hijab (head covering), you will be arrested,” she said. “For me, I have always been concerned about women’s rights. And one thing I can do to have an impact is talk continuously on social media about what it should look like. All women deserve basic human rights.”

Attaran earned her bachelor’s degree in anesthesiology in Iran and also worked as a professional photographer there for several years. A gifted artist, she also enjoys jewelry and fashion design. In fact, her fashion designs won second and third place in Vogue magazine’s Talent Competition in 2020 and 2021.

She said she’d love to make a career in creative arts but that it is not a “valued profession” in Iran. Even so, her experience with the Guerrilla Girls exhibit has inspired her in new ways.

The previous artist featured in The MUG introduced her to three Iranian photography students studying at the University of Massachusetts Amherst, and the women now are talking about curating their own exhibit on women’s rights — not just in Iran, but around the world.

Schleppi says she also was personally moved and awakened by the exhibit.

“I think most feminists today hear people say that feminism is old. That it’s something that was done back when we needed voting rights,” she said. “But what’s so infuriating is how very little progress we’ve actually made in politics and other areas of life.”

She pointed to two exhibit posters to demonstrate her point. Both pieces posed the same question: How many women had one-person exhibitions at NYC museums last year? The records reflected 1985 and 2015, but the numbers barely budged.

“In 1985, one woman had a solo exhibition between four prestigious museums,” Schleppi said. “Fast-forward 30 years and the numbers increased by one, respectively, at each museum. What is that? That’s insane.”

From now on, Schleppi says she plans to pay more attention to the placards next to the art she views. And she’ll speak up if she notices certain groups are underrepresented.

“That’s really what the Guerilla Girls were saying,” Derenne added. “For them, it really wasn’t about the individual artist. Rather, their message was that systemic change needed to happen. If you see inequity, discrimination or women being objectified, say something. Give that group a voice. We are such a visual culture. So, when we’re interacting with that visual culture, critique it. Build that into your own life.”

Derenne will give a public presentation on the Guerrilla Girls at 3:30 p.m. Friday in The Memorial Union Gallery. There will be time for questions and viewing of the artwork following the talk. Regular exhibit hours are from 9 a.m. to 5 p.m. Monday through Friday. (Bonus: Don’t forget to grab your very own gorilla mask cutout.)

The Guerrilla Girls exhibit was made possible through generous funding from the Myers Foundations.

MORE INFO: You can see the latest about The MUG and its upcoming exhibits and programs by following “UNDartcollectionsofficial” on Instagram or “UND Art Collections” on Facebook. 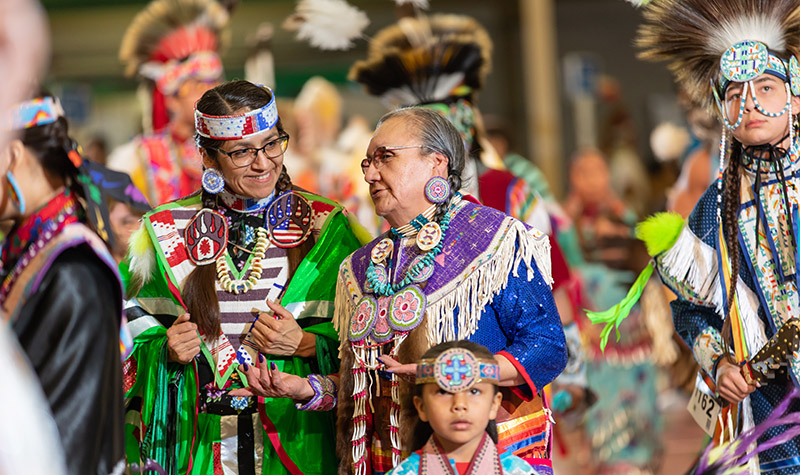 ‘All you see is happy all around’