by Patrick C. Miller
Published in: College of Arts & Sciences

When it comes to persuading people to get vaccinated as protection against COVID-19, a University of North Dakota study shows there’s no one-size-fits-all message that works for most people.

The study on the largest demographic group of unvaccinated residents in Grand Forks County was conducted by Soojung Kim, an associate professor in UND’s Department of Communication. It identified an unexpected result: those choosing not to get vaccinated are 19 to 29 years old and consider themselves liberals. As of June 2022, just 47% of this group had been vaccinated, compared to 70% to 90% of older demographic groups.

“News coverage tended to politicize this issue to show those who are vaccinated are liberals and those opposed to vaccinations are conservatives, Republicans and (Donald) Trump supporters,” Kim said. “But that’s not what the data is telling us.

“A lot of people in their 20s in Grand Forks County identify themselves as liberal, but they refused to get vaccinated because they had questions and concerns,” she explained.  “These hesitant individuals aren’t anti-vaxxers; they’re actually very thoughtful about their health.”

According to Kim, this isn’t unique to Grand Forks County. Vaccination rates among the 19-29 age group were low in other peer North Dakota counties, which is also consistent with national trends.

“It gives a lot of implications academically and practically that you can’t have inflexible mindsets about liberals being favorable to vaccines while Republicans and conservatives are against them,” she said.

Biomedical researchers might be convinced of the safety and effectiveness of the vaccines they developed under rigorous, peer-reviewed scientific procedures, but telling people to get vaccinated so they don’t get sick or die sometimes isn’t enough.

“People aren’t that simple,” Kim explained. “What steps do they take in their own worlds to make an informed decision? What role does their education, religion or value system play?

“If you vaguely say getting vaccinated protects others in your community, some might not identify themselves as community members. In their minds, they’re individuals.”

However, Kim said her research showed that these messages and incentives weren’t effective at convincing hesitant young people to get vaccinated.

“One of the major barriers for them to getting vaccinated was conflicting information,” she said. “They didn’t know what to trust because some of the reputable health organizations were releasing conflicting information at times. They also changed their standards and regulations frequently, which created hesitancy about the safety and efficacy of the vaccines.”

Generational differences and attitudes also might have been factors, although Kim noted that her study focused primarily on people in their 20s, popularly known as “Gen Z.”

“They have different mindsets and characteristics, which might be very different from Baby Boomers or even Millennials, who are closer in age,” Kim noted. “We know that beliefs and distrust in the pharmaceutical companies and how those big stakeholders responded to the pandemic played a very important role in some young adults’ decision to not get vaccinated.”

Paying people to get vaccinated and offering other incentives could have produced a “boomerang effect,” creating the opposite result of what was intended, according to Kim.

“When people develop their own knowledge about tactics, it primes their persuasion knowledge,” she said. “They believe something is going on they don’t know about, which fuels the distrust and the uncertainty they already had.

“It makes them step back and keeps them from deciding to get vaccinated,” Kim continued. “Incentives might have worked out well for some people, but they don’t work for those who are consistently hesitant about getting vaccinated.”

Kim commended Michael Dulitz with the Grand Forks Public Health Department for reaching out to her in November 2021 about conducting research on vaccination hesitancy. He wanted to understand why fewer than half of younger people had gotten vaccinated while large majorities of older demographic groups were vaccinated.

“The local public health department was aware of the problem,” she said. “They had concerns about the demographic data that made them question what they were doing and how they could do a better job of reaching this group. It was an important initiative.”

One of the key lessons Kim gleaned from the study was that rather than using Facebook as a one-way form of communication to broadcast information – such as vaccination site locations and hours – it could be used to engage those reluctant to get vaccinated by helping to address their concerns.

“General information might be helpful to those who already decided to get vaccinated, but it wouldn’t register at all with those who were still hesitant,” she said. “What helps move the needle for hesitant individuals is assurance about the vaccine being safe and effective and how it helps reduce the severity of COVID.”

But Kim said that type of information wasn’t being communicated at the local level, which meant people’s concerns weren’t being addressed.

In addition, Kim believes the scientific community should communicate with the public to address specific concerns, not blame the public for what it doesn’t know or do.

“When people are being hesitant and concerned about the science, we shouldn’t portray them as being anti-science or anti-vaxxers,” she said. “It’s a very reasonable response from individuals.

“Knowing the audience is always the first step,” she added. “You have to break it down into the groups you’re targeting. Is it females in their 20s? Is potential infertility their greatest concern? If so, how do you address them?

“You have to understand each segment of your audience and their concerns. Actively listening and trying to address their concerns helps bridge the gap between scientists and the public.”

Kim, who teaches a class on communicating science, noted that the social aspect of communications should be an important consideration when dealing with future pandemics.

“Not only do we need the biomedical scientific efforts to develop the vaccines, but we also need to help people trust the process so that we can all be in it together as a community,” she explained. “I’m glad to be part of the social-scientific effort to bridge the gap between the scientists, the government and the public.” 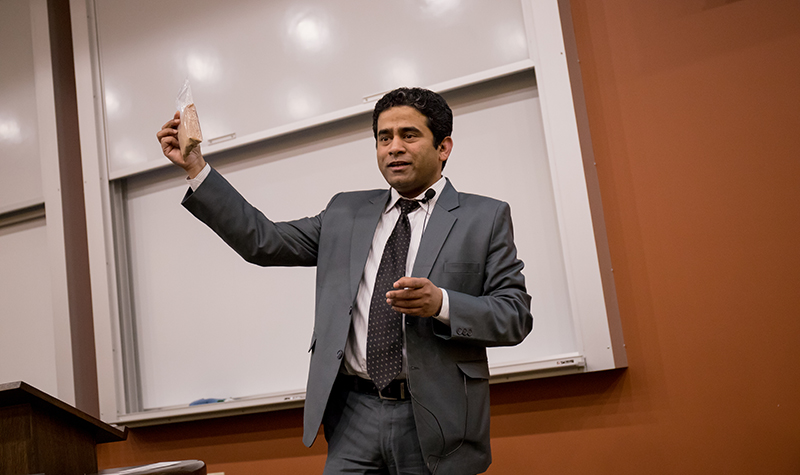