Recruit and retain teachers in rural areas: Yes, you can

Welcoming and rewarding teachers can lead to success, panelists at UND event agree 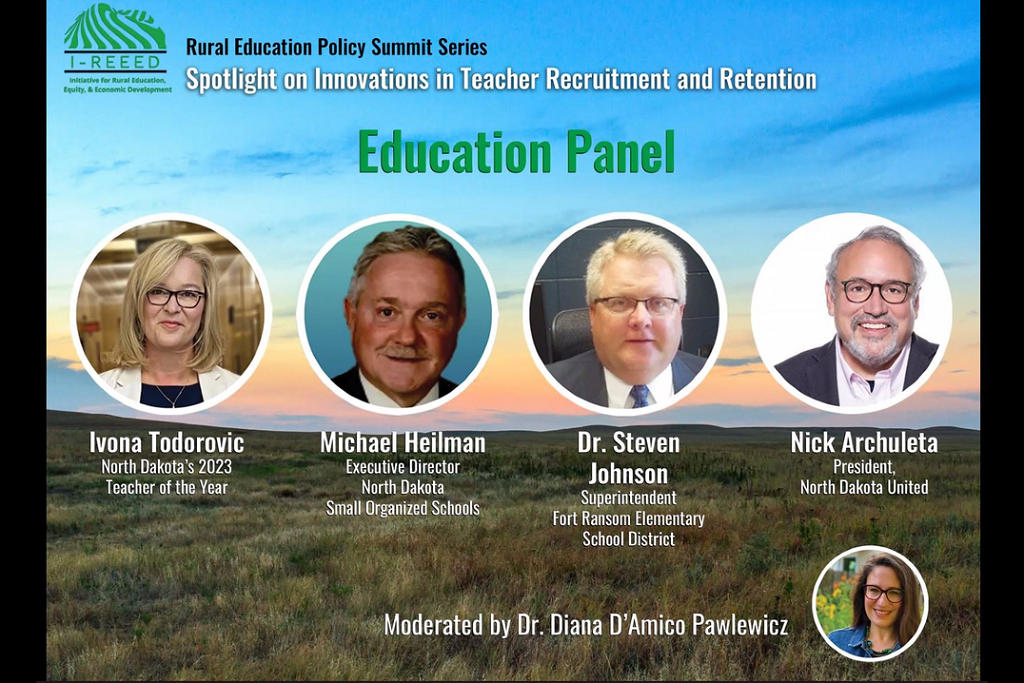 Two big challenges face rural school-district administrators who are wrestling with how to recruit teachers:

The first is the word, “rural.”

And the second is the word, “teachers.”

How can administrators overcome the stereotypes that small towns are dying and rural America is withering away? Moreover, how can they recruit teachers in an era of teacher shortages – an era in which, as InsideHigherEd.com reported in August, “the flow of new teachers through the pipeline has slowed to a trickle”?

K-12 officials, take note: those questions have answers, said panelists and a keynote speaker at a recent UND event that focused on recruiting and retaining rural teachers. Yes, the stereotypes about small towns can be – and are being – overcome; and yes, smart policies plus a culture of welcome and respect can attract teachers to rural schools and keep them there, the event’s participants agreed.

“I have been sending emails to people for the last half-hour saying, ‘Did you hear this part? Did you hear that part?’” said Cindy Juntunen, dean of the College of Education & Human Development at UND, toward the event’s close.

The discussion was so productive, she said, “and it’s something that we (at UND) have an obligation to the state to do.” Here’s hoping that the ideas offered get circulated to teachers, principals, school-board members and other interested parties regionwide, she added.

The Spotlight on Innovations in Teacher Recruitment and Retention was sponsored by the College of Education & Human Development and by I-REEED, the Initiative for Rural Education, Equity, and Economic Development. I-REEED is a research collaborative dedicated to building partnerships and producing research that is both practical and actionable, said Diana D’Amico Pawlewicz, I-REEED’s director and an associate professor of education, health and behavior at UND.

“Our goal is to make the case that research is useful – that it isn’t something that just appears in a journal but never gets used,” D’Amico Pawlewicz said. Instead, “it should be useful for real people who are grappling with real problems that are important.”

With that in mind, suggestions offered at the Spotlight event were backed by studies or real-world experience supporting their effectiveness. That started in the event’s keynote address: a talk titled, “Rewriting the Rural Narrative: Resident Recruitment and the Rural Brain Gain” by Benjamin Winchester, a rural sociologist and extension educator with the University of Minnesota Extension office in St Cloud, Minn.

“As you know, the title of my talk is ‘Rewriting the Rural Narrative,’” said Winchester,  a former staff member with the Center for Small Towns at the University of Minnesota-Morris.

“And really, that’s the premise behind all of my life’s work, because the narrative we’re using to describe our small towns is terrible.”

Moreover, that narrative – which describes rural America emptying out – is terrible in part because it’s inaccurate. You see, Winchester said, “as I traveled around rural Minnesota, I saw that what I was experiencing wasn’t matching up with that common narrative.”

For example, if there’s nobody left in small-town America – if the lucky few already have escaped – then why is housing so hard to find?

“If small towns are dying, I should be able to find homes all over the place,” Winchester said.

Clearly, something else is going on. And so, armed with his slogan “Speak softly and carry statistics,” the sociologist set out to test the “emptying out” narrative’s basis in fact.

Here’s what he learned:

First, rural America’s population has not gone down. In fact, it’s gone up, by 11 percent since 1970.

Second, it’s also true that the share of Americans living in rural areas is less than it used to be – one in six or seven people today, vs. one in four in 1970.

Third and most important, while much of rural America has seen an outmigration of 20- to 30-year-olds, there also has been a corresponding in-migration of slightly older adults.

“Nearly every rural county in Minnesota experienced a growth in the 30-34 and 35-39 age cohorts, and a majority of them experienced gains of greater than 25%,” Winchester wrote in a 2011 report.

So: how can small towns take advantage of this trend, which sees significant numbers of people in their 30s, 40s and 50s – many of them with children – feeling drawn toward small towns?

Here’s one idea: Broaden the economic-development focus beyond jobs to focus on housing and civic engagement, Winchester said. Because finding a house, not finding a job, tends to be the biggest obstacle to city dwellers contemplating a move.

And here’s another idea: Make sure yours is a welcoming community. Because when new residents say they feel welcome, they’re far more likely to also say they intend to stay in that small town for five years or more, surveys show.

Now, how about the “teacher” portion of the “rural teacher” question? That was the focus of the Spotlight event’s second half: a panel discussion with Winchester and several North Dakota educators, moderated by D’Amico Pawlewicz.

That’s especially true because older adults tend to be aging-in-place – that is, keeping their homes out of the housing market by staying longer in them than previous seniors did.

In 1996, Heilman was a school administrator in Garrison, N.D., a community that was struggling with this issue. “We had people who wanted to move there, but we didn’t have houses available,” he said.

So Garrison sought contributions and built condominiums – five at first, and a total of 15 or 20 later on. “The goal was to build affordable housing for elderly people who were ready to move out of their homes,” Heilman said. “It gave them a place to go, and it opened up housing. … So yes, it can be done in small communities. That was a prime example, and it was done in North Dakota.”

As surveys conducted by North Dakota educators and the National Rural Education Association have shown, teachers who don’t feel welcomed by their communities report that as a source of intense dissatisfaction, Johnson said.

Fortunately, there are lots of ways to make teachers feel welcomed and respected, he said. These include asking about their hobbies (with an eye toward introducing the teachers to relevant interest groups), to more material gestures such as paying for teachers to get their licenses or advanced degrees.

Leadership at the superintendent, school board and even City Council level is the key. “If I can’t recruit a teacher to Lisbon, N.D., it isn’t just a school problem,” Johnson said. “It’s a community problem. So when you have an educator in Lisbon, do you honor that position?”

If the community’s answer is yes, any recruiting-and-retention issue will be on its way to being solved, he said.

• Nick Archuleta, president of North Dakota United, told a story of visiting teachers in a western North Dakota district not long ago. Morale seemed high, relations with the school board and school administrations were excellent, turnover among teachers was low and open positions were none, the teachers reported.

“Then I said, ‘What’s your starting salary here?’” Archuleta said.

“And I said, ‘We just solved the teacher shortage,’” Archuleta continued.

“Pay people a professional salary right from the get-go, offer them good benefits and be nice – in other words, be supportive of those teachers. I think we would have a lot less trouble attracting teachers to the profession.”

• Don’t underestimate the power of camaraderie – the deep satisfaction of connecting with colleagues and finding friendship and peer support, said Ivona Todorovic, North Dakota’s 2023 Teacher of the Year and a teacher at Red River High School in Grand Forks.

“For example, one thing that comes to mind is ‘coffee talks,’” she said.

“You know, have some coffee shops in town where we can just get together and talk. It doesn’t have to be anything official, because when it’s made official, people often feel more reserved and are afraid to talk.”

But when the gathering is informal and the conversations are sincere, “then this is going to be something that matters,” she said.

“Because from those connections, that’s how we start innovating and coming up with great ideas, connecting, supporting each other and finding solutions. … I would start with that, because it’s amazing how the ideas come and how connections are created. It just works.”

Other ideas that came up in the discussion included making free housing available for student teachers in small towns, inviting North Dakota legislators to visit classrooms for a first-hand look at the schools, and setting aside time during professional-development sessions for teachers simply to converse with each other.

Looking ahead to success

“I appreciate all of you so much,” D’Amico Pawlewicz said at the discussion’s close.

“I appreciate all of you who joined the webinar and are putting your questions in the chat, too.

“On behalf of our team at I-REEED and my colleagues in the College of Education & Human Development, we want to be a part of all of this with you. We would love to work with your districts and your organizations, and to offer our support,” she continued. “I found this to be such a productive conversation.”