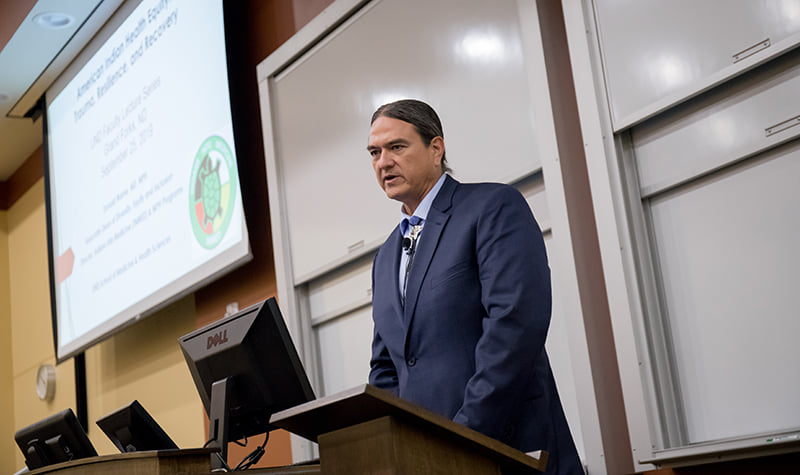 Don Warne, M.D., M.P.H., director of the UND School of Medicine & Health Sciences (SMHS) public health and Indians Into Medicine (INMED) programs and the School’s associate dean for diversity, equity, and inclusion, has been awarded the 2021 Helen Rodríguez-Trías Award for Social Justice from the American Public Health Association (APHA).

“APHA joins your colleagues in recognizing your commitment to Indigenous, underserved and disadvantaged communities,” wrote APHA Executive Director Georges Benjamin, M.D., in his notice-of-award to Warne. “Your work related to the development and application of community focused research has furthered the achievement of health equity and social justice. As an educator and mentor your contributions to public health have extended to diverse populations across the country.”

The Helen Rodríguez-Trías Social Justice Award is presented to an individual who has distinguished themselves professionally by working toward social justice for disadvantaged populations. It is named after the late Helen Rodríguez-Trías, past president of the American Public Health Association and a pediatrician who “strove to meet the needs of underserved and disadvantaged populations, especially women and children,” noted the APHA.

“I am deeply honored to receive this award in Helen’s name,” said Warne. “In our work at UND, the programs and community outreach are a team effort, so I see this honor as a team award for our public health, INMED, and Indigenous Health faculty, staff, and students.”

Since coming to the SMHS in 2018, Warne has led efforts to found or expand multiple Indigenous health initiatives at UND, including the Indigenous Trauma & Resilience Research Center (the result of a five-year award from the National Institutes of Health totaling more than $10 million), the region’s first Practice-Based Research Network known as the American Indian Collaborative Research Network (AICoRN), and the world’s first Department of Indigenous Health and doctoral program in Indigenous health.

Warne is a “respected academic leader with a history of building and leading graduate education programs in public health, medicine, and Indigenous health,” added Grand Forks Public Health Director Debbie Swanson and Melanie Nadeau, assistant director of the SMHS public health program, in their nomination letter sent to the APHA earlier this year.

“His welcoming spirit is present in every classroom, community event, public arena, and in his home,” the pair wrote. “He demonstrates inclusion in all his interactions with students, colleagues, neighbors, and community residents. Dr. Warne is a public health colleague, extraordinary teacher, social justice advocate, and worthy of this award nomination.”

An enrolled member of the Oglala Lakota Tribe in Pine Ridge, S.D., Warne received his Doctor of Medicine degree from the Stanford University School of Medicine in 1995 and his Master of Public Health degree from Harvard University in 2002. A prolific scholar and grant writer, Warne is also Senior Policy Advisor for the Great Plains Tribal Chairmen’s Health Board and former Senior Fellow of American Indian Health Policy for the Robert Wood Johnson Foundation Center for Health Policy at the University of New Mexico.

“This is an incredible acknowledgement that speaks, again, to the caliber of work ongoing at UND in these vital arenas – public health, Indigenous health, and the production of Indigenous health providers,” added Dr. Joshua Wynne, dean of the SMHS and vice president for health affairs at UND. “I congratulate Dr. Warne on yet another national recognition of his great work.”