As the world eagerly awaits the next episode in Marvel’s “Black Panther” film franchise and the Smithsonian prepares a massive retrospective on Afrofuturism, the visionary musician, writer, and thinker, Sun Ra enjoys growing acclaim as the grandfather of Afrofuturism. 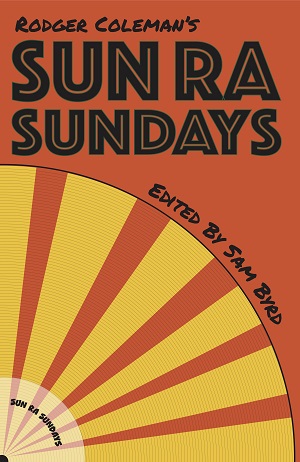 The Digital Press at the University of North Dakota is proud to announce the publication of “Sun Ra Sundays.” This groundbreaking book offers readers an accessible window into Sun Ra’s musical legacy from 1961 to 1979, which includes many of his most revolutionary and inspiring releases.

Born Herman Blount, Le Sony’r Ra (or Sun Ra) took his new name when he moved from Birmingham, Alabama to Chicago. In Chicago, he became active in the booming post-war music scene and assembled a band comprised of some of the best young musicians in the city. Under Sun Ra’s direction, this group produced some of the most sophisticated jazz music the city had seen and combined it with space age costumes, stories of alien abduction, and distinctive interpretations of Black history. By the late 1950s, Sun Ra relocated with his band, known as the Arkestra, to New York where he became a mainstay in the city’s experimental music scene and recorded and released a bewildering number of albums. The number and variety of releases has long overwhelmed the casual listener.

Rodger Coleman started “Sun Ra Sundays” on his blog NuVoid as a way to introduce Sun Ra to a wider audience. His weekly posts exploring Ra’s discography ran for several years before he got discouraged and “pulled the plug” on his efforts to unpack the complicated history and legacy of Sun Ra’s music. By then, however, Coleman’s musings had already become an invaluable touchstone for Sun Ra fans and curious newcomers alike.

Coleman remains modest about his work: “Ra’s discography is vast and bewildering and these scribblings were my attempt to at least partially come to grips with it.”

Sam Byrd, who took the lead in editing Rodger Coleman’s blog posts into the book “Sun Ra Sundays” is more forthright: “There is no one proper way to approach Sun Ra’s massive output, but Rodger Coleman gives us a start with comprehensive overviews and in-depth musical analyses of every official Sun Ra album from 1961 to 1979, as well as invaluable examinations of an astounding number of unreleased concert recordings and other rarities.”

What makes this book unique is both Byrd and Coleman are musicians.

Coleman notes: “It wasn’t until Sam and I started covering some of Sun Ra’s music back in the ‘90s that I could really wrap my head around it. Make no mistake: no matter how “out there” the music may seem to get, it remains deeply rooted in the entire history of African American musical practice. These roots may be obscured but can still be discerned.”

When asked why someone might pick up this book and explore the music, thought, and legacy of Sun Ra, Coleman offered this observation:

“Whatever you might think of the music, there are lessons to be learned about discipline, DIY entrepreneurship, and the virtues of collective action. Over the course of decades, Ra attracted a core group of gifted musicians who eschewed fame and fortune to fulfill his vision of self-sufficiency and artistic integrity.”

Like all books from The Digital Press at the University of North Dakota, “Sun Ra Sundays” is available as a free download or a low-cost paperback: https://thedigitalpress.org/sun-ra-sundays/

You can listen to some of Sam and Rodger’s music here:

And their adventuresome cover of Sun Ra’s “Dancing Shadows” as the first track here: