Eric Plummer, associate vice president for public safety and chief of police, has been named chief of police at Radford University in Radford, Va., following a nationwide search. His appointment is effective March 1. In his new position, Plummer will oversee the Radford University Police Department, which is known for direct engagement, outreach and service to the campus. The department was the first university-based police department in Virginia to earn accreditation.

Plummer’s last day at the University will be Feb. 28.

“Since arriving at UND, I have truly appreciated Eric’s leadership and contributions to life on campus,” said UND President Andrew Armacost. “His focus on campus safety for students, staff and faculty is unmatched. During his tenure, UND has consistently been ranked as the safest college in North Dakota, with 97 percent of students reporting feeling safe on campus. His pioneering work on the use of unmanned aircraft in campus law enforcement has set a national standard. As the chair of our UND Pandemic Response Committee, he has led us through one of the most challenging times in UND’s history.  We will miss him and know he will continue to impact lives on his next campus.”

Jed Shiver, vice president for finance & operations and chief operating officer, said he was impressed with Chief Plummer’s comprehensive responsibilities, including Public Safety in a very broad sense, since the day Shivers arrived on campus in May 2018.

“While many people associate Chief Plummer with our fine University Police Department, he has also been responsible for environmental, health, and safety and  risk management,” Shivers said. “He has been a leader, not only on our campus, but also nationally. Yet someone with this significant professional presence always made sure that his role as a servant-leader on our campus was primary and really brought forward the concept and implementation of community policing, where the University Police Department both partners with all members of our University community and enforces the laws.

“Finally, Eric really cares about students, staff, and faculty. His respectful demeanor, which emphasizes careful listening, has been a key attribute. On behalf of UND, we wish him well. I’m sure he’ll be successful at Radford University and I look forward to the work of search committee to find and select a worthy successor. I also looking forward to working with Interim Chief Meidinger and Director Wynne and have a every confidence in their efforts.”

“I have enjoyed the opportunity to serve UND and the greater Grand Forks communities in my various roles on and off campus,” said Plummer. “Creating partnerships has always been a high priority in our efforts to provide a safe and effective place to live, learn, work, and visit. Working together, we have created an environment at UND built upon trust, caring, and transparency. Although I am excited about the new opportunity to serve the Radford University community, I will greatly miss all of the relationships developed in my time here at UND.”

Eric Plummer has been with the University since October of 2012. He is responsible for law enforcement, emergency management, environmental health and safety, lab safety, risk management and insurance, public safety, leadership and workers compensation.

He is an active member of the UND Pandemic Planning & Response Team, which has helped guide the University through the COVID-19 crisis.

During his time at UND, Plummer has transformed public safety on campus, with improved lighting, more open spaces, improved social media relationships with students and the public, 24/7 safety escorts, vehicle service program and more. He oversaw the development of the SafeCampus app at UND, as well as the Enterprise Risk Management Committee and Continuity of Operations Program. Plummer has also implemented training collaborations with other regional policing agencies and task forces, including SWAT teams, bomb squad, and drug task forces. He assisted in pioneering the use of UAS in law enforcement.

He also has been a key leader on the Pandemic Response Committee, which is responsible for guiding UND through the UND COVID-19 pandemic.

He has served as an adjunct instructor at Texas A&M Engineering Extension Service since 2014. Before coming to UND, he served at Southern Arkansas University System from 2010-2012, Florida Highway Patrol from 1999-2007. He has also served as an intelligence analyst and specialist in the U.S. Army Reserves, as a reserve deputy, and as a campus service officer for the University of Central Arkansas Police Department.

He is an member of the National Residence Hall Honorary, has received the UND Gordon Henry Award, the UND Meritorious Service Award, as well as a number of other awards

He is active in the Grand Forks community, and has served as board chair for the Community Violence Intervention Center and as board chair of the Grand Forks Public Safety Answering Point. He currently serves on the Committee on UAS Research Ethics and Privacy and as chair of the Domestic Preparedness Committee for the International Association of Campus Law Enforcement Administrators. 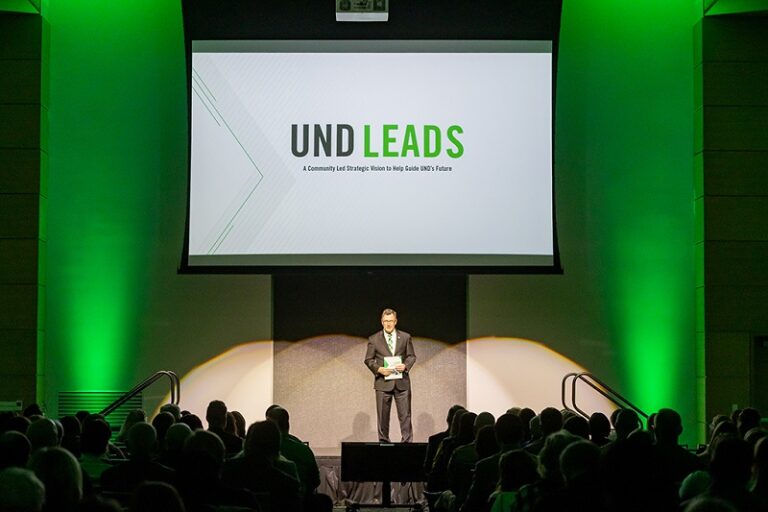