Remembering the ‘Return of Lake Agassiz’

Twenty-five years ago, the Red River of the North breached its dikes and overran Greater Grand Forks after a bitter winter and a record 101 inches of snow.

Grand Forks was underwater, and downtown was on fire.

UND closed and sent students home as 90 percent of Grand Forks evacuated, using University Avenue, one of the last passable routes. The river covered roads and bridges, filling homes and buildings with sewage and floodwaters.

It crested April 19 at 54.33 feet, nearly twice the flood stage of 28 feet. At the time, it was greatest natural disaster in North Dakota history and one of the largest-ever disasters in the U.S., with 60,000 residents from Grand Forks and East Grand Forks displaced.

But not everyone left.

A small cadre of faculty and staff “camped” at UND Facilities to protect the University despite the danger, often working 20-hour days.

Much of the University was saved through the hard work of those few people, including President Ken and First Lady Toby Baker, who slept on the floor of the Facilities building along with other faculty and staff. Through determination, hard work, long hours, deep knowledge of the campus, and sheer luck, they managed to protect much of UND from flood damage.

They “powered down” buildings, sent elevators to the top floors, manned pumps, and did everything they could to protect as much of campus as possible.

Soon, the Facilities and Skalicky Hall area of campus became a control center from which city, state and federal agencies fought the flood and dealt with the aftermath.

Though the University had 72 flooded buildings and $75 million in damage, it provided housing, operating space for displaced businesses, accommodations for thousands of volunteers from across the nation, and other services that previously had been taken for granted.

The Hyslop Sports Center housed nearly 5,000 volunteers who descended into cold, dark basements and spaces to haul out, by hand, tons of muck-covered debris for homeowners. They slept on cots that had been “sanitized” by being dunked in the UND swimming pool.

After the waters receded, residents returned to find homes damaged or destroyed, basements filled with polluted water, and generations of treasures lost. There was no safe drinking water, no working toilets, and uninhabitable homes.

UND residence halls housed townspeople as they mucked out their flooded basements and repaired their houses.

A phone bank to assist students, faculty and staff was dubbed the Virtual University and handled 2,000 calls a day at its peak.

Part of the rebuilding effort was to document UND’s actions as a manual in case of another emergency as well as a resource for the future.

The project was assigned to Dick Larson, editor and photographer, and Jan Orvik, writer and editor, both in the Office of University Relations.

“It seemed simple at the time,” said Orvik. “We were to document what was done to save the University and Cities in case of future disasters.”

Faculty and staff were invited to contribute their personal accounts and to loan photos to create an archive. 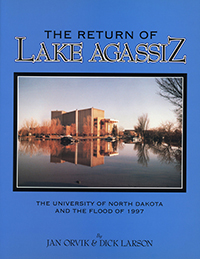 The project escalated to 32 interviews, some lasting two hours. The stories were compelling: an evacuating student’s car rear-ended by a boat on DeMers Ave.; air boats zipping through flooded streets; Memorial Stadium’s artificial turf floating on floodwaters; the irony of a biology faculty member coming home to find fish swimming in his flooded basement.

The project became a book, The Return of Lake Agassiz, titled after the minutes and records kept by an administrative officer throughout the flood. It was a reference to the immense glacial lake that once covered the Red River Valley.

Orvik, whose rural home was not flooded, conducted audio interviews (available in Chester Fritz Library Special Collections) and wrote much of the book on evenings and weekends. Larson provided and organized photos as well as edited and designed the book, which was typed and formatted by Mavis Ness, information processing specialist in University Relations.

“The stories that came from the interviews needed to be shared,” Orvik said, recalling how a Television Center staff member videotaped flood damage, wearing waders as he ventured into chest-high murky water. “The ‘Red Tag Diner’ at the Food Services warehouse fed UND employees who slept at Plant Services. People couldn’t even wash their hands, so a Thompson farmer provided water, which was heated on a gas grill. People said that was the highlight of the day – food and warm water.”

“I had lost my home to the flood, a condo unit in the former Elks Lodge building next to the Red River,” remembered Larson, whose home began flooding while he was sandbagging homes on Olson Drive. “After spending the summer in a Brannon Hall room, I was assigned a FEMA trailer in the former Princeton trailer park on the north campus. The quarters were rather cramped, and I set up a computer work station in what could be called the trailer’s “living room.”  That was where I did my editing of the manuscript, mainly after office work hours.”

“What really stood out was the sense of community,” Orvik said. “Everyone was working together to save and rebuild UND and Greater Grand Forks. We really wanted to document that.”

A journey, a family and a legacy

He shoots! He scores!